Appearing on Xbox Live Arcade tomorrow, Alien Hominid HD sports some very gorgeous cartoon style presentation in this 2D shooting title. This is where Xbox Live Arcade truly excels, in releasing high quality gaming with all the benefits of a modern console system.

Lets face it, Xbox Live Arcade has been in the doldrums for quite some time now, with countless retro release after another, but now we have something to really get our teeth into until Worms is released. 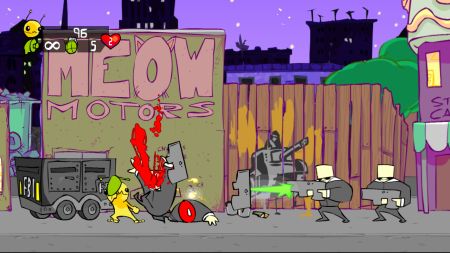 It really is a frantic frolic as you progress through the outlandishly comical universe of Alien Hominid HD. This is the antidote to all our recent woes with the Xbox Live Arcade service and if we see a few more titles like this appearing, we are really in for a treat.

Xbox Live Arcade has the potential to be a really special service, so I have been really struggling to be a happy little Xbox 360 gamer with so many bizarre titles appearing (or in many cases not appearing!).

Long live Xbox Live Arcade. It is time to get all excited again!