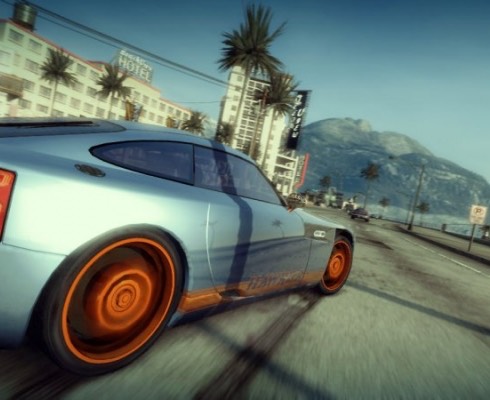 While enjoying the pleasure of Burnout Paradise for the Xbox 360, it was nice to finally experience the Live Vision Camera utilised in a very robust and more importantly, fun way.

It seems although many of us had high hopes for this handy piece of eye candy, it is virtually ignored by most games. Even the Xbox Live Arcade titles released, where you would expect at least some support, has also taken the solitary route. Finally Burnout Paradise has come along to save the day! It is a very simple use of the camera, but it could give other developers ideas and that is the crucial element to all of this.

Basically anyone who has played Burnout will know that taking down your racing opponents is sheer bliss. This is achieved by shoving them into objects on the road and buildings or by simply smashing into them at great speed. The pure genius part though is that if you do indeed have a Live Vision Camera connected to your Xbox 360 console and you have been the recipient of foul play, you are given a few seconds to compose yourself and then snap. Your image is taken and sent to your opponent with either the anger on your face or a few tears rolling down your cheek.

So let us all for a moment consider how many titles experience a slight pause, which could allow camera support? How about Call of Duty 4? Imagine being shot and as well as the replay appearing, how about a picture capture as well to send to your worst enemy? Of course developers need to be careful that nothing vital on the screen is covered up with these shots, but wouldn’t it be a nice touch? How about on the final leader board, where the winning team can have their images taken or the person with the most kills can flex his muscles?

Live video is always a charming experience when playing in a group, but single snap shots can be just as addictive and grin inducing. So yet another plea, developers please take note and consider how single snaps could be a part of your game.

and you get achievement points for a certain amount of shots of your victims!!