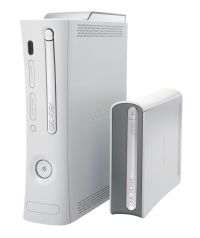 Yesterday I received my HD DVD add on for the Microsoft Xbox 360, so here are my first thoughts. I have been monitoring the HD DVD Versus Blu-ray topics around the Internet with interest and a little bit of fear as well as both formats enter the arena. 2007 is going to be a big year for these two competing formats and in my humble opinion, HD DVD probably has the best chance of winning (although winning will more likely be a bigger market share rather than the opposition stopping production).

Why HD DVD Could Win over Blu-ray:

Installation was easy thanks to a bundled disk, which you insert into the Xbox 360 built in drive ‘before’ plugging in the HD DVD via USB. Since the drive has been released, there is already an update which it will ask you to install before playing back your first HD movie. The HD DVD drive also has a hub on the back so you can plug in your Xbox Live Vision Camera and even the wireless adaptor, which also has a clip at the rear of the HD DVD unit to sit the adaptor on. Now the Xbox 360 dashboard will change ever so slightly showing a new way to access your Xbox 360 built in DVD drive and your new HD DVD add on at the bottom of the screen.

Requiring its own power source, it is not the most attractive add on you are likely to ever see, but do remember this is basically a first generation drive and as with anything new it will be little bulky. The main thing is it isn’t ugly and does try to match the Xbox 360 styling.

Movie playback is smooth and uninterrupted. Navigating the movies is far simpler thanks to a refined interface that is much more consistent between the different titles. One problem I have noticed though is that some of the movies have a menu bar appear at the bottom of the movie and although this is fine if you are not stretching your movies to remove the letterbox widescreen bars at the top and bottom, when you do you can’t see the menu which takes away any sense of refinement!

If we take King Kong as an example, the video quality is immense. The vibrancy of the colours and depth of the little details is really something we can shout about. There is a difference between one title and another on the amount of visual quality, but all so far seem to be a large improvement over standard DVD.

Please understand though I am using a 720p native Samsung LCD HDTV display and I can still see oodles of improvement making the purchase very worthwhile, but remember the movies are encoded in 1080p (6x resolution over NTSC DVD) so there is still quite a bit more detail available if you have a compatible display.

If you want to dabble in high definition movies right now, the Xbox 360 add on provides excellent value for money (if you already have an Xbox 360) with great performance and visual quality. The more extreme movie fan will want to wait until stand alone players come down in price though to make use of the Dolby Digital True HD surround sound and HDMI (although HDMI isn’t required to get the most out of the HD DVD for the Xbox 360!). The Xbox 360 does take a little longer to boot up with the drive connected, however it is seconds extra so nothing to be concerned about.

For those who talk about On Demand HD downloads replacing any need for either HD DVD or Blu-ray any time soon, just remember this. Downloading films over the Internet in HD format simply isn’t going to happen successfully in the next 5 years as people still love a physical copy that can be taken to any HD DVD/Blu-ray player. If you look at how On Demand music downloads have evolved, Digital Rights Management (DRM) has been a nightmare and ownership of purchased tracks confusing. Until a solid standard has been set for the online dowloading of music and video, we could have competitors using different formats, different software and worse different devices.

I am sure we are going to see continuous updates for the HD DVD drive add on to improve any minor issues that remain and to add new features, but right now you can enjoy the HD experience and at a great affordable price.

How does the Xbox sound when playing a movie ?
Are the cooling fans running full speed ?

The Xbox 360 fans sound the same loudness as when you are sitting in the dashboard with no game disk in. So very reasonable trade off between performance needed and cooling.

You see I was never that great with mathematics :) Thanks for the correction.

So if I bought a HD DVD now it would play in an SD DVD player right or do I misunderstand something? Seems pretty cool if you can. I don’t have any intention of upgrading to HD just yet, but the idea that I could buy HD DVD’s right now, watch them in SD and then when I upgrade be able to watch them in HD sounds great!

There are certain movies (not all!) available on HD DVD disks that on the other side of the same disk has a DVD layer for standard DVD players.

So one ‘hybrid’ disk:

One side = HD DVD
Other side = DVD

Therefore allowing you to play the movie on both HD DVD players and older DVD players.

I reckon both HD-DVD and blu ray could fail, since theres nothing wrong with DVD’s and next gen games dont really need that kind of format. I know its sensible releasing it before christmas, but for Â£130, I would rather buy about 3-4 games for my 360 than that, considering it would cost much more by the time you buy a few HD-DVD’s.

I think HD DVD has a very good chance of doing well as a lot of people are investing in HD screens and on demand movies is something of a distant dream at the moment.

The Xbox 360 may have a Video Marketplace, which is very good, but the quality isn’t as high as HD DVD and DRM protection is a pain in the backside. There needs to be a way of creating a hub over a network to truly have on demand movie downloads rather than being restricted to one device.

I prefer having a hard copy (Disk) of a movie.

DVD still has a lot of life in it, but it can’t be compared to HD DVD when there is so much more detail at 1080p and even 720p.

If more HD DVD titles have a hybrid disk, HD DVD will do very well indeed!