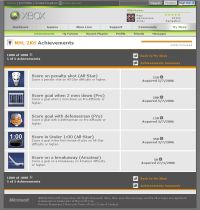 One of the greatest new features of the Microsoft Xbox 360 has to be the achievements system. Earning points and unlocking achievements for playing games in a certain way has really changed the way I personally play games.

I was always happy to play a game on the ‘normal’ difficulty settings, however since achievements now push you to play on harder settings (such as Call of Duty 2), I find myself coming back to run through the game just to unlock a few more precious achievements. Just yesterday I passed 10,000 overall gamerscore, which inspired me to reflect on the benefits and downfalls of achievements.

The system isn’t perfect though, as it can be quite easily cheesed by carefully configuring game options. Every developer also seems to have their own take of how the achievements should work, which sometimes is great, or just allows for frustration to set in. Let’s take a game like Perfect Dark Zero, where you are can unlock achievements from a huge list. This is quite fun, but I find there are just too many for anyone to be bothered to compare them with their own. Then there are other games like FIFA World Cup Germany 2006, which have an achievement worth a staggering 500 points, which is far too hefty for a single achievement to be worth.

A game can also be branded badly by achievements if they are easy to unlock. Peter Jackson’s King Kong – The Official Game of the Movie (How long is that title!!) is now recognised as nothing more than an easy 1000 point achievements game, which means renting just to unlock all the points rather than enjoying the gameplay experience. Of course there are always going to be statistic whores, who will rent or buy every game just to expand their total gamer points, however it soon becomes pretty obvious who will in fact go that far.

Regardless of all of this though, it has changed my gaming habits completely and that is all credit to the ideas from Microsoft and the implementation of most developers.

Achievements have definitely changed the way I play, but for the better. For instance, like you mentioned above, I’m playing through CoD2 on Veteran difficulty to see if I can achieve those points. Something I would have never done before, I would have just gone through it on normal and would have been done (well maybe not with CoD2 because that game is awesome, but you get the point ;)).

For me though, getting them IS like achieving something and sometimes are a test of my skills, which is what I think they should be all about. I don’t think it should be a status symbol or a popularity contest (some people think a higher score makes you cooler /:&#41;) because then it just gets ridiculous.

My motto about GamerScore points and achievements is, I get em when I get em. :)

i used to be a hore at grabing those achievement points, but i feel its very sad to be doing that for something that u are just going to compare with someone.

i only get games that i like now and spend most of my time going out, i think the achievement points have shown me something there is more to life than gaming and thats why i do not hardly come on with all me friends anymore.

As has been said in the previous posts its changed the way we play our games, for the better me thinks. i would’ve played through a game like cod2 on normal or easy( i think its the latter) and then i would’nt of enjoyed the full offline experience. but some of the achievements are just silly hard anyway. can i just add chromehounds is the bomb! highly recommended online.

xbox 360 achievments are the best cause i just go out and get all these new games every time i get payed there for earning more achievments lol:). achievments have changedthe way i play games because they make me go through the games on all difficulties not just the hardest 1:d