I don’t know about you, but I have been anxiously waiting for this title to be released to the Xbox Live Arcade for a long while now! Having been enjoying early code of Worms for quite a long period, I can declare with great glee that I am very impressed.

I remember playing the first Worms game on the PC and ever since then I have enjoyed Worms Reinforcements and Worms 2. After that it went a bit wrong…

3D gaming is a great wonder of the modern console era, but how often do I miss the simplicity and nostalgia factor of good old 2D. Worms like many games have had the 3D overhaul, only to come out the other end with a less than satisfying advancement. Worms, which is due to be released this Wednesday on Xbox Live Arcade goes back to its roots and looks fantastic. 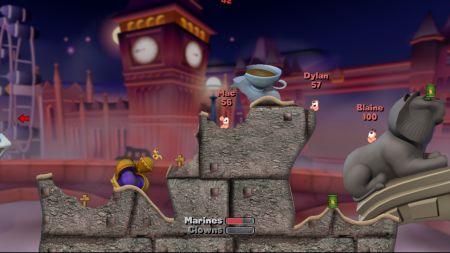 All your favourite weapons are there such as the exploding sheep, airstrike, Kamikaze to mention just a few. The graphics as you would expect take full advantage of the high definition presentation and is sure to be a blast online. Following the Worms 2 cartoon styling, the best looking Worms game ever will be released and with all the benefits of achievements and Xbox Live online play.

At 800 points, this is surely a must download for any Worms fan.

Broken Sword Shadow of the Templars – The Director’s Cut Impressions

Xbox 360 Marketplace Points – Yes There is a Point!

Ah, been looking forward to first impressions of this since, hey, who isn’t a Worms (2D) fan? I’ve spent weeks of my youth doing nothing but playing Worms.

Downloaded it, love it. I miss the Holy Hand Grenade though :((

Unfortunatly, the Live features have some very irritating teething problems, recorded by a lot of people. The problems range from getting the impression that you are unable to connect to a game, or you are joining a game only to get a disconnection – these two problems are most definitly related to the fact that on a number of occasions, when you try and host a session it locks up your 360 and of course – disconnects the clients.

There is a growing thread, I only hope Microsoft and Team17 look into this asap as this could be the difference between a quick adoption of a great game, or a complete flop/dissapointment.

I personally have been very frustrated with the Worms online experience after dishing out the dollars this morning.

Here is the related thread:

It crashed for me when the lobby was full and I started the game, but other than that it has been running very well.

I am sure any problems will be looked into.

i miss the holy grenade to :((