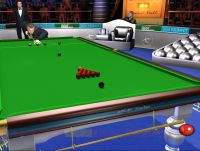 Expecting World Snooker Championship 2007 to have all the delights that next generation gaming usually throws at us, I am a little disappointed in the lack of polish so far.

It plays very much like the original Xbox counterparts and dare I say it looks very similar as well. There are very noticeable differences with the characters which in particular look much better and you notice a shine like effect on some of the clothing, however overall the game suffers from some very average visuals.

The worst aspect though has to be the commentary! Repetitive in the extreme, with some really (supposedly funny I expect) comments made from the legend that is John Virgo. It just doesn’t come over right at all and instead you are left with that sensation of dread, waiting intently for the sentence to finish.

One major plus is the fact that you can play pool as well as the traditional snooker. Of course Xbox Live online play is also available. I so wanted to find a much improved snooker system, but I am left feeling a little underwhelmed at the moment, but hopefully a few games online will rectify some of that.

I will be reviewing this game for 360monster in the near future.