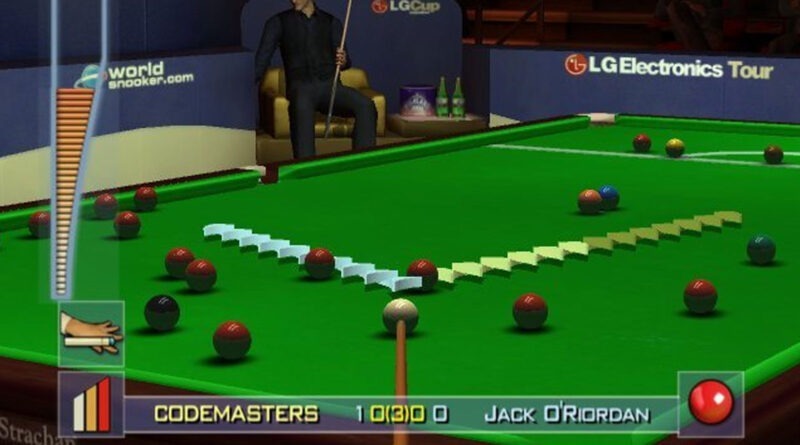 Finally a sequel to a rather disappointing entry into Snooker games on the Xbox comes World Championship Snooker 2004 for the Xbox. The first attempt was lacking that appeal you need especially in a quite slow gaming environment that is snooker.

Now here is their sequel, and this will be helped greatly by the addition of online play, which is sure to get many more sales even if the game doesn’t live up to expectations, so without further ado lets get started.

Graphically the first snooker game made me cringe with some of the blob like visuals of the snooker balls. This has been greatly enhanced with nice lighting reflecting off the surface and the blob look has finally become extinct. A very clean looking game indeed and this has changed the whole perspective of the title. Enough has certainly been increased in this sequel to win over many more fans of the original, the only downside is the texture on the actual table cloth. It is still not quite high enough on some of the tables for my liking but I am being very picky now.

Just like before, the crowd consists of actual polygon characters and the overall character detail has been increased, but only by a smidgen. Overall the presentation is about the same with the needed work aimed at the snooker table area and, let’s face it, this is where most of your attention will be.

Something that really got me biting at the wire of my controller was the extremely hard learning curve. A curse of many sport titles, especially in the past, is the darned easy start you find as you progress the difficulty exploding into the unreal. Find yourself setting up the perfect snooker only to find the opponent aiming, striking and potting the required ball eventually clearing the table and leaving you with a very empty feeling inside. Unfortunately this has not improved very much from the previous title. Although some changes have been made to the learning curve of this game, you will still get to a point when frustration overwhelms all your senses which requires at least 5 minutes of beating up your most loathed cushion.

So still some gripes with the game but I must say an improvement never the less. If the CPU skill gets too rough for you, get Xbox Live and enjoy some opposition where you can at last get the more human touch if you have problems getting your friends over to have a go.

New camera angles from the pockets like you see on television try to add more feel like you are watching a professional game on the old box. However when you are worried where the cue ball might end up, you miss vital action which the pocket camera does not pick up. Maybe in the next version they can add a little box in the corner keeping an eye on the rest of the action.

Commentary is virtually identical to the previous title with some annoying habits. The snooker sounds are a bit more encouraging now that the game is in 5.1 surround although this actually causes a problem in the title. As you play you will literally be surrounded not by constant cheers, not by constant snooker sounds, but instead by the crowd coughing and their mobile phones ringing prompting a comment from John Virgo. Cough.Cough.. Cough, it is nearly enough to drive you insane, you could really get a sponsor for this game from one of the more noted cough medicines. Maybe there should be an ‘administer cough medicine to crowd on entry to stadium’ option somewhere in the settings as it really does spoil the atmosphere.

Controls are going to be something close to that comfortable place you enjoy, the warm feeling of continuality as you see having played the previous snooker game that controls are still pleasingly easy. Maybe a little too easy with the arrows carefully pointing where the ball will go. The settings for this can be changed for more of a challenge, however it is a far cry from games like Jimmy White, which made for much more skill to pull of a pleasing shot. However this is a console game and I am sure unlike staring closely at our PC monitors, we would be squinting on our consoles as our TV sits at the other side of the room.

The major addition that will catch most peoples’ attention is the online play of Xbox Live. Xbox Live has taken many games a lot further offering human opposition over the less interesting and predictable CPU opponent. The online area of the game is very good, although not perfect. You lose the commentary and player animations are cut from the game. You can add them in the online menu but this makes waiting times for each shot increase so much it just is not worth it in the end. All you see then is the balls moving around the table. You do not know even how the other player is lining up the shot as there is no cue on screen or movement in fact. Just an egg timer indicating that it is their turn and you should wait or even better make a cup of tea.

One major gripe for me is the Pool included in the game. Great for small games with you and a mate, but you can not play it online even though it is on the single player game. This is very disappointing! but then remember they are bringing out an online pool game a little after the release date of this title. Bit of a money spinner there when they could have easily included online pool in this title.

A very good snooker game let down by obvious flaws like annoying coughing by the crowd, strange computer Artificial Intelligence and dodgy music. Still there is no competition for snooker games for the Xbox so this will do for now! 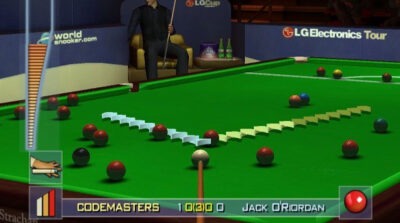 I recently became world rank Number 1 after beating Ronnie O`Sullivan in a final where i also produced a maximum 147 break along with several other century breaks,so it is quite playable:)