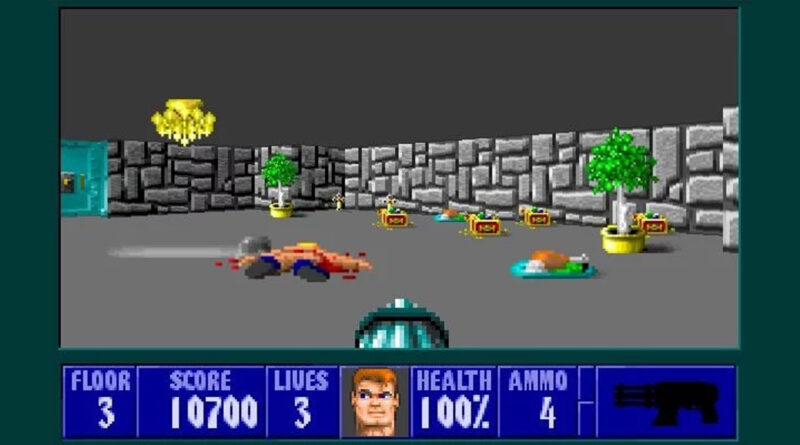 Way back in 1994 at the age of thirteen, I eagerly anticipated my Christmas present which actually was my first true personal computer. The Acorn Archimedes A3010 certainly nurtured my passion for computing, technology and gaming – with several software titles that would inspire my love for point and click adventures and in this case, first-person shooters. One of the gaming greats I enjoyed on the 32bit platform and now celebrating its 20th anniversary is Wolfenstein 3D.

Released in 1992 on the PC platform, Wolfenstein 3D became an important moment in gaming history as it is often referred to as the title that heralded the captivation that the first-person shooter (FPS) genre now enjoys.

Created by id Software and published by Apogee Software, Wolfenstein 3D is set in the era of World War II as you control an American spy named William “B.J.” Blazkowicz, who is attempting to escape Castle Wolfenstein. This is far from an easy venture as you encounter Nazis, attack dogs and even mutants as you traverse levels that require the locating of keys among a maze of 3D environments.

I spent many an hour enjoying Wolfenstein 3D on the Acorn Archimedes A3010, with its three floppy disks and pretty lavish digitised sound effects.

I spent many an hour enjoying Wolfenstein 3D on the Acorn Archimedes A3010, with its three floppy disks and pretty lavish digitised sound effects. I even considered learning German to understand what the Nazi’s were screaming at me as I confronted them.

Highlights included the of course amazing 3D environments, which allowed for exploration not really experienced before in the same way, finding secret areas behind corridor walls revealing super powerful (and fun!) weaponry and last but certainly not least – end of episode bosses, which included the opportunity to confront Hitler in his weird metal suit of destruction.

Although the actual enemies and objects were 2D sprites and not actually 3D, they still offered plenty of character and fascination – adding to the overall charm of Wolfenstein 3D and its quirks.

To celebrate the anniversary, a free browser version of the game is currently available for you to either reminisce or experience this truly classic title for the very first time.