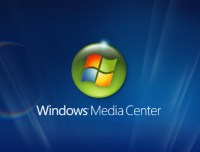 It wasn’t that long ago I applied to be a Microsoft TV Ambassador as part of ‘I Love TV on my PC‘, which is basically an information gathering process Microsoft used to glean thoughts and feedback on Windows Media Center, specifically for watching and recording live TV. They also handed out free digital TV Freeview USB tuners which was a nice touch. Happily I was accepted and received my television viewing equipped piece of hardware not long after confirmation and with the power of Windows Media Center providing the required software, my testing began.

Viewing TV on a computer is certainly not a recent invention, in fact TV cards and even TV viewing add on cards that slotted onto certain graphics cards such as the Matrox Mystique have been around for many years. What really has changed though is that we have digital Freeview in the UK providing a much more pleasurable video quality than the fuzzy analogue signal of the past and rather than an additional internal card requiring you to open your computer as part of the installation process, the far simpler route of using a USB port is now the favourable option. 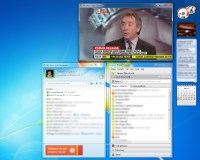 Windows Media Center has been around since Windows XP offered this option as a separate version of the operating system. I have had this, Windows Vista and now Windows 7 Home Premium (also compatible with the Windows 7 Ultimate version) of which the software has certainly evolved in that time, not a great deal, however the Windows 7 variant that I will be covering here certainly has a nice set of features that will hopefully interest you.

Stand alone units such as Sky+ have revolutionised the way we watch television in the UK stretching out to the millions of consumers who enjoy the service, delivering live television, pause, rewind, recording and the real masterpiece ‘Series Link Recording’, that has made watching our favourite programmes without these facilities a scary prospect. Well you don’t have to lash out money on subscriptions or buy a special stand alone Freeview box with an internal or external hard drive to enjoy these features as they are available right here on Windows Media Center through your computer. 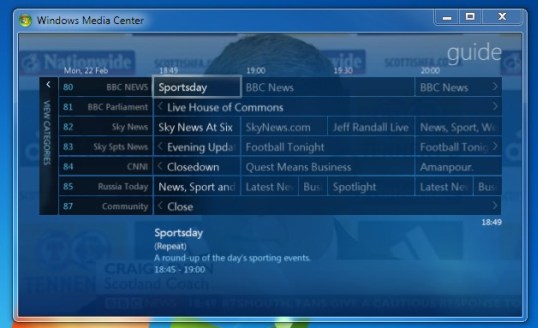 I am sure most of us are used to the ‘Guide’ feature since we entered the digital TV age. This provides a list of channels with the shows displayed in blocks allowing you to view programme details, set reminders and more importantly configure recording options. Gone are the days where you had to enter fiddly Video+ numbers to set your VCR or enter all the information manually such as dates, times and a channel. Now we just select one of the programmes and press the record button. The real bonus though is ‘Record Series’, which will not only record the next episode but all episodes in the series even if the schedule is altered in the weeks and months to come. It certainly takes the stress out of watching ‘Heroes‘ where missing just a single episode can throw you off the already complicated progressing plot and of course this same logic can be applied to many television series. 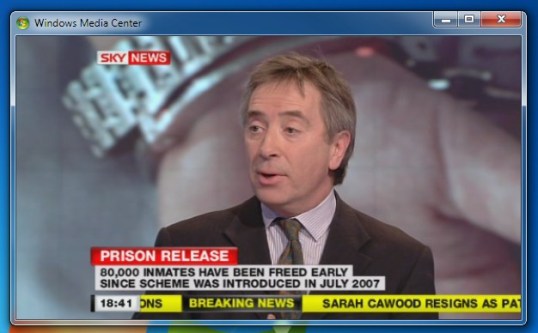 Television can be watched full screen or in a window. I am lucky enough to have a dual monitor set-up, which means I have two monitors next to each other where the desktop can stretch along both screens. This means I can drag and drop windows from one monitor to the other and also allows me to place Windows Media Center in a window in one screen while I work on the other.

If someone rings or knocks on the door, I can pause live television and return later pressing play continuing exactly where I left off. If there is a good debate on BBC News 24 and I didn’t quite catch what the politician stated, I can rewind a little to replay that section. This really changes your viewing experience and we can enjoy it on our computers as well as long as you have a USB TV dongle, which are available for very little expense.

One of the newest features of Windows Media Center on Windows 7 is the addition of Digital Teletext. This has been available in other software solutions for computers for a long time and finally arrives here as well, which gives you access to news, sporting results and other information including the often disappointing Lotto results. It runs incredibly quickly and is yet another way of keeping you in the loop. 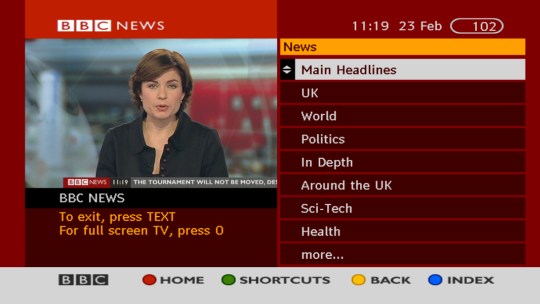 Of course not everybody wants to watch TV on their computer all of the time, in fact the opposite is true. With an Xbox 360 you can stream live television directly to your Microsoft console with all the recording and playback features I have already discussed. The Xbox 360 may not be the quietest device on the market for TV viewing, but it does offer a convenient way of experiencing the wonders of the software in maybe your bedroom or secondary relaxing area if you already have a stand alone unit in your living room such as Sky+. As long as your Xbox 360 is connected on your computer network through a router either wired or wireless, this is all possible as your console acts as what Microsoft call a ‘Windows Media Center Extender’.

It is a shame you can’t use your laptop with Windows 7 installed and use this as an extender as well, instead you would need a USB TV device to enable this function which is very disappointing. The other issue is of course you need some kind of aerial and if your room doesn’t have a connection to your main external one located on the roof, you may have to invest in an indoor version. This can be problematic as reception for digital can vary depending on your location not just within the UK but within the house itself. 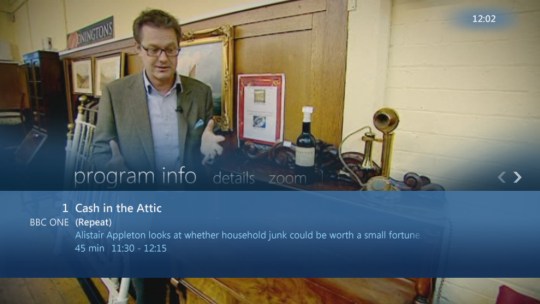 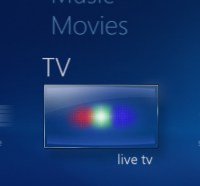 Before I end this article, remember that Windows Media Center isn’t just a live television watching software solution, but a music and video player as well. You can even access Sky Player and other providers if you are a subscriber to their individual services. You can view your photographs and watch them in a fancy slide-show.

Maybe you are a student with little room for a television or for those who like me have a room with a computer, consoles and a television all together, it doesn’t take a great leap of faith to divulge in television viewing in this way. Although I have Sky+ HD, having a PC solution as well while I work is a wonderful treat and I am sure many of you reading this will easily find reasons to experience this method of watching television on a computer.

I Play the Simon the Sorcerer Theme Live on Yamaha Tyros3