Skip to content
You are here: Home > Platforms > PC > Windows 10 Hands On – The Start Menu is Back, Start Screen Evolves 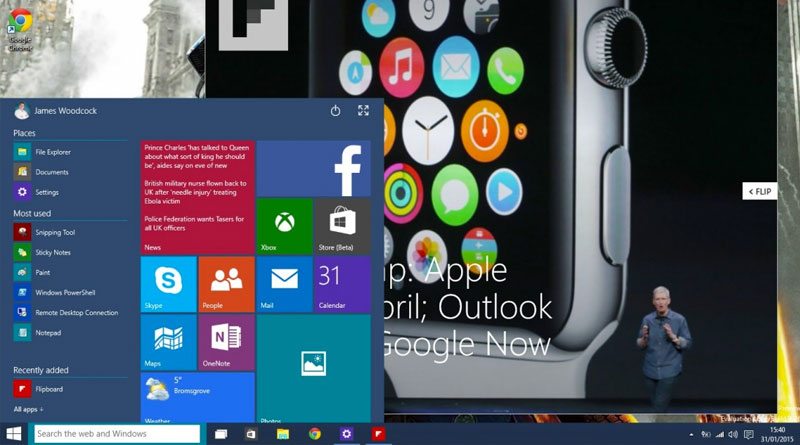 Windows 8 and its free update Windows 8.1 certainly upset a lot of traditional Windows fans. Aiming for the tablet world when the iPad was becoming a dominant force to be reckoned with, the Windows team made drastic changes to Windows 7 to adapt to this new world of touchscreen interactivity. In doing so, Microsoft instead alienated a lot of its users with some pretty bizarre design changes that released to the world as Windows 8.

I for one accepted Windows 8 into my life with little resistance and actually liked much of the new ‘desktop’ additions, but even I as a techie could see that there was a growing number of individuals who just couldn’t or indeed wouldn’t adapt to the changes.

Windows 10 will be released by the end of 2015 for free to Windows 7 and Windows 8.1 users (if you upgrade within the first year) and with this new operating system – a much more refined approach to what a modern computer interface should be.

My main focus here is the new Start Menu, a return of some of the classic elements of what we remember from Windows 7 yet dragging it kicking and screaming into the new era. It also retains much of what we experienced of the Windows 8 Start Screen so hopefully there should be something for everyone to at least appreciate, if not also enjoy.

The return of the Start Menu opens just like the Windows 7 version. Clicking the Windows icon in the lower left of the screen (yes the one that returned in Windows 8.1) now opens the Start Menu, not the Start Screen. On the left lists some of the important folder locations, followed by your most used apps, then showing a recently installed app and finally a link to list all of your apps. To the right of this displays what remains of the Start Screen, the animated tiles that can be resized and reordered to your liking that previews app information without having to open them.

The full screen Start Screen experience lives on though, but in a new way. You can also expand the Start Menu to reveal a full screen version that simply provides far more room for the apps to breath. Ideal for a tablet, also works well on a traditional computer and even better – either mode is only one click away, no nasty setting hidden far away that is difficult to locate.

It somehow merges the best of the old and the new, and even though this is an early preview of what Windows 10 really has to offer, it is certainly an encouraging one. This is boosted with the addition of Cortana, the voice activated inclusion to the operating system where you can ask a question and Cortana will offer an answer with text and even a computer generated voice (yes the actual one from Halo!). This alas is not currently available in the UK, however you can also type to search for apps, files and on the web in a search bar that sits snugly next to the Start Menu.

So, the hybrid world that almost destroyed Windows 8 has somehow managed to play nice with each other and now… with great anticipation, we can all look forward to Windows 10. It has solved the Achilles Heel that almost crippled its predecessor and even better this is just one change among many that have transformed Windows into an operating system the typical user needn’t be afraid of. The addition of windowed fullscreen apps also help no end, a notifications panel that displays your most recent.. well notifications and gone is the Charms Bar.

All in all, Windows 10 is crying out for your attention and deservedly so. This is not a rehash, nor a backwards step. It is a recognition that you can embrace the new, yet not forget the users who rely on you. Microsoft really want you to love Windows 10 and while it is not really a thought that passes our minds for a Windows operating system, there is a twinkle in my eye right now, I am almost at the point of gushing I know, but finally we may be able to hold our head high again and bathe in the beauty of the ‘new’ we were promised so long ago. That alone is worthy of a little love at the very least!

Based on the Windows 10 Technical Preview version 9926.