After playing Sonic the Hedgehog on the Xbox 360 I thought SEGA had lost any sense of its heritage as it was a complete disaster, but then came along Virtua Tennis 3 to apparently save the day…

Having owned both previous Virtua Tennis games on the much loved SEGA Dreamcast, the latest in the series achieves the same style of arcade enjoyment right on our Xbox 360 console. With the same almost pick up and play attitude, the tennis game to beat all others has arrived with photo realistic graphics and with an extremely fun gameplay factor to match. 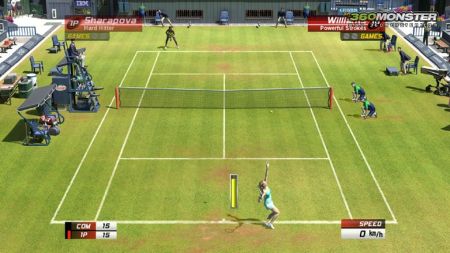 The only downsides I have noticed are that in some doubles matches the framerate can drop a little during the transitions on screen after a point has been completed, the online is a little laggy (could be just I haven’t played anyone from the UK yet!) and the player you are controlling is extremely sensitive to positioning yourself for the next shot, which can result in an unwanted dive destroying your winning streak.

Let us also not forget the 1080p support as well, although it is excellent that the Xbox 360 can match the PlayStation 3 in this area, the number of us who actually own 1080p compatible high definition televisions is slim at best, but a nice addition I suppose for those lucky bleeders who do (I am more than just a little jealous maybe).

Overall it is a very welcome third title in the Virtua Tennis legacy and is sure to be far better received than the lackluster sequel Top Spin 2. SEGA seems to have finally rekindled that magic with the help from Sumo Digital and long may it continue!

Good to see you getting the info out to us Brits before most other people again. But I’m wondering. Like me you’re a Top Spin player, how would you rate VT3 compared to either of the TS offerings, tennis wise?

Well this is where I have a problem…

I adored Top Spin on the original Xbox, however the sequel that appeared on the Xbox 360 was actually quite disappointing in a few areas and failed to gain momentum on the popularity of the first.

Virtua Tennis 3 at this moment in time is better than Top Spin 2 for gameplay, however graphically it is a little more complex and will be explained in my future review.