Requesting any kind of support from a company can result in a process of misery, disappointment and even anger if you feel that you have been let down in your hour of need. Although there have been live chat communications available online for quite some years, there is one medium where quick fire answers are all part of the wondrous experience – I am referring to social networking giant ‘Twitter’.

Twitter has fast become a mammoth collection of individuals who love to share their unusual habits, passions for life and especially seems suited for the odd moan or two. The wisest of companies including in this example Microsoft have realised that not all support instances require lengthy emails or the painful nightmare of hanging around on hold when using the phone. @XboxSupport is designed for gamers with an Xbox 360 console who can use the wonders of Twitter to tweet any questions they may have and more often than not, a swift answer is forthcoming, which is sure to delight even the most disgruntled of enthusiast.

To take a recent personal example, a suspicious email arrived in my inbox today purporting to be emanating from Microsoft with an offer to download a free avatar costume with the further incentive of an Xbox Kinect title if you act quickly. Of course, as an Xbox 360 enthusiast my first reaction was to click the link shown as everything you would expect from such an email appeared as it should. Later alarm bells were raised that the email ‘may’ have been a way to dupe people into revealing their personal information. Thankfully with a lot of communication and discussion with the support team and other Twitter users also sharing the same concerns, the matter was soon resolved and the email was indeed genuine. 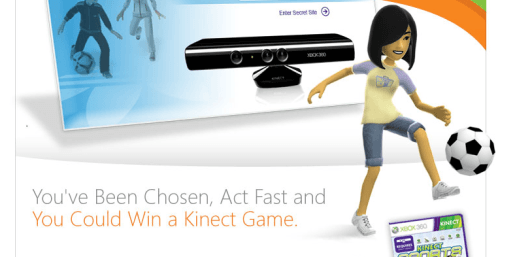 When there are fears of something untoward occurring, the last thing you desire is a lengthy resolution to a possible crises, however with Twitter and the intelligent and rapid response of the wonderful team located on @XboxSupport, my concerns were eased in a very short amount of time. There are of course limitations – personal information shouldn’t be shared over a public system, yet for those nagging queries the opportunity for an answer is available at your finger tips.

Twitter and indeed other social networking services such as Facebook are being used to great effect to promote and encourage us all to spend a little more cash their way, however we shouldn’t forget companies who also take on the challenges of a live interaction with us the community. I certainly hope those who are yet to tread this path of Twitter support will consider this as a viable addition to the typical arsenal we are all used to.