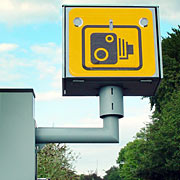 Nottingham where I live is becoming like a city wide version of Big Brother. No matter where you look, either CCTV or speed cameras are watching as you go about your daily routine. Road humps and other speed reducing measures are hopefully working, as it certainly causes drivers quite a bit of grief, however one individual tried to cheat the system, and failed:

A driver who ripped up a 40mph road sign and put it in a 30mph zone to try and dodge a speeding ticket has been given an intermittent jail term. John Hopwood, 42, moved the sign from a road in Manchester to one in Rochdale after he was caught speeding twice in two days. He then took a photograph of it to “prove” he had been closer to the limit than first thought. However, the plan was foiled after lawyers drafted in a facial mapping expert to study marks on the signs.

At Manchester Crown Court Hopwood, from Hazel Grove in Stockport, Greater Manchester, was given an intermittent custodial sentence of 56 days. The incident happened in April last year after Hopwood, a care assistant for Manchester City Council, was clocked by two different speed cameras on consecutive days. He was first caught travelling at 48mph in a 40mph zone on Princess Road in Manchester and was spotted doing 41mph in a 30mph area on Albert Royd Street, Rochdale, the following day. In a bid to fool police, the driver removed the 40mph sign in Manchester and attached it to a lamppost in Rochdale and took a photo.

I would like to see a lot of the roads nationwide re-evaluated for the speed limit. So many roads recently have been dropped to far lower speeds, when the situation hasn’t changed one bit. Public opinion is a mixed bag though, however common sense often seems to escape some of the decisions.

Some Belgian got a 2 speeding tickets on a highway, with 50 km difference between the 2 voilations. He claimed he only had to pay one, because he said he never went below the legal limit of 120km/h over the entire freeway, so he only broke the law “once”. The judge agreed.

Something I heard happening here a while ago ~:>