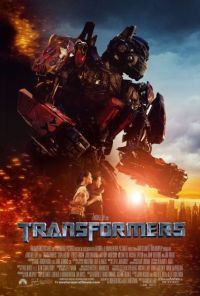 As a 26 year old, I remember watching the original cartoon series on television with a great big grin on my face. Whoever the genius was to have robots and vehicles feature in one cartoon and have them transform between the two forms deserves a hefty pat on the back and a medal the size of Cybertron.

Then came the 1986 movie, which slaughtered most of the favourite characters. If this wasn’t enough to cope with, we had to wait another 21 agonising years before our Transformers fix appeared again. Yes this heritage has actually transformed into a modern, CG spectacular with even comical sections that add a nice light hearted approach in between the plot.

If you are looking for a film with serious plot, clever twists and amazing story telling, well then you may be in the wrong place, but on the other hand if you want to relive your glorious youth, be dazzled by fantastic computer animation, fast and explosive action sequences and featuring a few giggles along the way, possibly Transformers has the potential to blow your teenagers sweaty socks off.

I am not going to go into detail about acting, who featured and all the usual movie review stuff you read on the Internet, instead I point you towards my good friend Nick who has written a great post on his blog for this kind of information. However I will say as a massive Transformers fan, I am more than satisfied by this excellent production.

Yes it is not perfect, yes there are moments in the film where you have seen the same types of silly plot elements before, but you can forgive certain failures for the overall experience. I took my poor Mother along with me today to see the film at the cinema. She like so many other Mothers have had to put up with buying the toys, watching the cartoon and for those really unfortunate ones like mine, had to listen to the 1986 movie soundtrack in the car while traveling great distances. Trust me I ‘Dare’!

So as I went in expecting a rather bored individual to be sat beside me during the movie, I did in fact notice the complete opposite. You know a film is special when your own Mum turns around to you as the credits begin and says ‘That was awesome!’.

So on this development I can’t imagine how I can convince you more, so on that note if you haven’t seen it before, please at least give it a go. For Transformers fans this is a must see, although you will have some purists who will dislike some of the Decepticons (although to a certain extent I do have to agree!), but hey it had to be more modernised and this is the result.

Bring on the sequel!

I was really impressed by how well this movie turned out, it was great to watch in terms of effects and generally a ‘good fun’ film – I came away from the cinema pleased with it (it could so easily have turned out to be a turkey!) – bring on the 2 sequels which I think have already been ordered!