Skip to content
You are here: Home > Platforms > Apple > iPad > Trainz Simulator on the Apple iPad – A New Dawn in Rail Simulation? 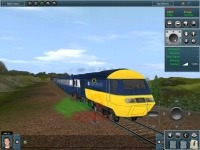 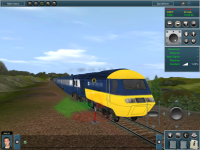 For many years I have experienced the wonder and sometimes frustrations of living one of my unobtainable dreams. Train simulators exist for this very reason – the thrill and sheer delight of operating these huge locomotives that have forever entranced a young man’s mind when a chance of hopping into the driver’s seat on the real giants is out of reach.

The Trainz series is celebrating its 10th anniversary and what better way to attempt something quite spectacular. Now the highly successful yet Humble Apple iPad can boast it now features a train simulator all of its own thanks to Trainz Simulator releasing recently on the platform. 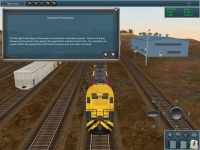 Currently and in the past, train simulators of this kind have needed a fair amount of processing power to represent the realism and accuracy of replicating a journey and driving experience. The Apple iPad, especially considering it is a first generation product isn’t really known for pushing polygons at the same rapid speed a personal computer could achieve, however it still has a go and it certainly needs to with Trainz Simulator.

This is maybe the first stumbling block of this title on the iPad. The iPad although quite a powerful beast for certain applications, 3D polygon potential – compared to our personal computers is certainly lacking the same expertise. Maybe we have been spoilt in this department, but however you look at it, the iPad struggles with this particular world. Textures lack finer detail, objects can stutter towards you and the frame-rate lacks any consistency. This really is to be expected, but it is an unavoidable truth that the iPad just isn’t a platform yet suited for this genre. Possibly when a new generation appears in 2011, however I have to talk about the current circumstances.

On the positive note though, there are plenty of landscape objects to at least give the impression of distance, especially with the country-side offering its lush secrets to the user. As problematic as the graphical fidelity can be to achieve on the iPad, there are moments of glee as you take a moment to absorb all of the surroundings. 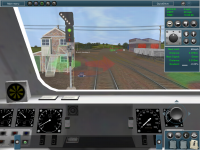 So graphically it isn’t going to knock your socks off even though there are elements that will come close, but how does it operate as a simulation. Actually quite admirably although you at times wonder if you are controlling a model railway rather than the real thing. Controlling the locomotive is primarily achieved by the interface to the top right of the screen. Rotating a dial adjusts the speed either forwards or backwards and takes a fair bit of practice to measure the correct amounts without passing over the speed limits. Further information is displayed below detailing the next speed limit, next signal status and gradient. Options for additional camera angles are also present, including of course an in-cab view of the action and controls, an exterior position and a nice almost documentary-like following of your train as it speeds down the line.

For those who are new to the Trainz series or maybe have never even experimented with a train simulator can run the included tutorials to learn the basics of operating and viewing your locomotives. 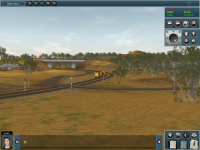 Looking around the field of view is a little awkward, especially on a touch screen when one thing above all rules the day and again this comes down to expectation.

You at first believe you can rotate the world with the power of your finger almost anywhere on the screen, yet you are actually limited to two virtual controls on the lower right. One control acts as an analogue stick allowing you to rotate the view, while another functions as a zoom. It can get a little fiddly, but you manage.

The creative soul within can find relief with the option to build your own routes. This is actually where the iPad comes into its own, allowing your fingers to directly select, move and manipulate objects and landscapes on the screen. The process is actually akin to artistry as you glide, slide and stretch the on-screen elements in an effort to create your own masterpiece. For me, this is the highlight of the whole simulator and I am sure if you are so inclined, could easily spend many hours experimenting and testing various arrangements of layouts. 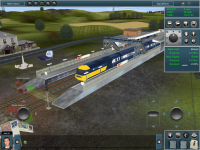 I can truly see the appeal and potential of enjoying a train simulator on a device such as the Apple iPad and congratulations to those who have dared to be the first in taking this hazardous route. It certainly provides a pretty decent simulation and all the basics exist, unfortunately mainly due to the hardware limitations of the device, the connection with the actual world it is simulating can feel a little distant due to the quite poor graphical quality and the sometimes slow to react controls.

Maybe when an iPad successor is released in 2011 by Apple, a faster and more capable 3D presentation can be accomplished giving Trainz Simulator the power it surely deserves, but certainly at the moment as impressive and as potent as the idea may be, the power just isn’t there yet to allow this title to really shine on this new simulator frontier. One day quite soon though who knows…

I''m delighted with this new iPad version. I hope eventually it will include a steam loco w/tender and some more box cars. I have the PC version as well, but neither of my two computers runs the program very well, so the iPad version was greatly welcomed.