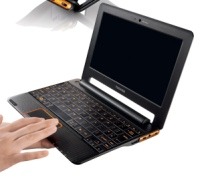 Netbooks are quite the curiosity to a lot of people. Netbooks are smaller versions of the traditional laptop, featuring a reduced set of specifications yet still able to perform familiar tasks.

For most people, surfing the web and checking emails is about as much as you need to obtain while away from home or work. Netbooks offer a portable solution to this requirement yet Toshiba has avoided using the often turned to operating system of Windows and dared to adventure into the Android territory.

Android originally appeared on mobile phones, sporting features similar to those that the Apple iPhones have earned much of their success from. The operating system has slowly found its way to tablet devices and now thanks to Toshiba a netbook.

Visually it looks like a traditional netbook with its pleasingly small proportions, a keyboard that has physical keys and a touch-pad for moving around the mouse cursor. There are ports for HDMI, a joint headphones and microphone socket, SD card slot, power port and USB. It is absolutely adorable to hold, caring for the case as if it was one of your own children. The orange highlights around the casing may not be to everybody’s taste, however it certainly allows for the keyboard text to stand out.

Under the hood is a NVIDIA Tegra processor running at 1GHz, 512MB of RAM, an 8GB SSD for storage, wireless LAN supporting b/g and n, Bluetooth, stereo speakers, built-in camera and a 10.1” widescreen display running at 1024×600.

The keyboard is certainly pleasant to use regardless of its diminutive nature and the display works well when reading text and admiring images.

After using Android on both phones and tablet devices, it is quite a surprise to see it appear on a netbook. For anyone who has used the operating system, your first thoughts are of a touch screen interface, yet here is it in netbook form benefiting from a ‘real’ keyboard.

It is all about speed and as wonderful as the Windows platform can be, with so many features and options it can be not only a little overwhelming at times, but can also impact the limited hardware specifications netbooks employ. With Android though which is designed to run on extremely portable devices, whizzing from one area to another need not be a chore or an inconvenience. Whether you are generally surfing the Internet, checking your Facebook friends, tweeting on Twitter or checking the influx of emails, the Toshiba AC100 holds up well to the pressures of an online existence. This is its main strength, not to mention the quick booting times. Shutting the lid informs Android to take a much deserved nap but open the lid again and it springs back to life in just one incredibly short moment.

Toshiba have made an impressive attempt to integrate Android with a netbook configuration although you can’t help escape the feeling that it was originally designed for a touch screen. This is more evident when you use the standard Internet browser as scrolling becomes quite awkward. Scrolling the page up and down is achieved by clicking and holding down the left mouse button and dragging on the touch-pad simulating your finger had it been a touch screen. This is why Opera is pre-installed, which makes much better use of both the touch-pad by supplying a scroll-bar and even the cursor keys operate as you might expect.

If you wish to install additional applications, there is a marketplace called Camangi, although this pales into comparison with the standard one offered by Android itself which is unfortunately not present. This means many of your phone apps you love won’t be available, unless they are offered elsewhere.

Thankfully, Google who released Android have also functional tools that exist on the Internet. Google Docs is a set of facilities that you might expect with an office suite of applications – including word processing, spreadsheets, presentations and more. Any documents you create in this area are saved privately (or if you wish publicly) online and by logging into your free Google account on any other device you can view all the same information you have lovingly typed in an instant exactly as you left it.

You also have the ability to access mobile Internet if you are without a Wi-Fi Connection by purchasing the 3G option.

If you wish to avoid the sometimes underpowered and slow Windows netbook variants that are available on the market, the Toshiba AC100 Netbook with Android 2.1 certainly offers a fairly fast alternative. The Android operating system also is its main problem though, especially as the main store for acquiring apps is notably missing and you can’t help but ignore the touch screen elements that don’t feature.

If you need a device that is extremely portable and wish to delve into the basics of web exploration and email checking with a ‘real’ keyboard, it is hard to ignore the appeal of the Toshiba AC100. I eagerly await the release of Google’s Chrome operating system in mid-2011 but until then, Android offers a pleasing possibility.

Features that lacked a little:

Move It! Review for iPhone and Android – Sliding, Sorting, Shuffling and Shifting Blocks