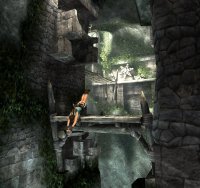 Yes I am a Tomb Raider follower with aspirations of searching dark and treacherous tombs, killing the odd bat, wolf or bear with a twist of mystical happenings. It was only the first Tomb Raider though that really had that sense of isolation and danger.

Tomb Raider Legend was a great addition to the series and may have saved it from total oblivion, however you felt that you were lead by the hand every step of the way with commentary, binoculars showing key puzzle clues and hardly any animals in sight. Although a good romp, Legend was still quite disappointing in the end.

Tomb Raider Anniversary sets to change all that though, with all the superb feature of the firsts (and best in my opinion) title in the series, while using an enhanced version of the Legend engine to add new moves, graphical excellence and a better gameplay experience.

If the demo is anything to go by, Tomb Raider Anniversary is set to be the best Tomb Raider EVER! Yes maybe even beating the original of which I hold so dear to my own heart. If you haven’t tried the demo yet, make sure you do!

Tomb Raider Anniversary will be coming out on the PC, PS2 and PSP in the next few days and for the Nintendo Wii later in the year. I am still hoping though that a port of the PC version will release for Xbox 360 and PS3!

Yes James, good review. But lets be honest, for an adventure game its no God of War is it? lol :d

lol Andrew, even I remember that one. Talk about true nostalgia…