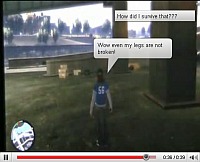 YouTube certainly is one of the success stories on the Internet and it seems since the Google takeover, a few new features are appearing including increased video quality versions if videos were uploaded in a high enough resolution and now video annotations.

This allows you to add speech bubbles, visual notes and mouse-over regions highlighting a specific area on screen with more information. This is an incredibly simple, yet useful tool which will I am sure will start a clamour of stampeding YouTube users returning to add useful facts other users can view while watching their uploaded curiosities. There is no doubt that some people will go mad with these annotations, but it has to be a good thing to add an extra dimension to the video.

Below is a scene I captured from Grand Theft Auto IV for the Xbox 360, where I and three of my friends dared to dash up a ramp, hurtling over the water to the other side.

Only two of us made the jump as traffic has a nasty habit of getting in your way and one of the two lucky ones still managed to crash head first into a barrier. This didn’t stop my female character from landing on her head in spectacular fashion and somehow surviving.

Currently YouTube doesn’t yet show video annotations or high quality resolution when embedding video into another website, so make sure you look at the YouTube page with this video on for the full effect![/embed]

It is quite simple to operate the annotation placement. Pausing the video and then selecting which kind of annotation you require, resizing, moving and adding text is about all the process involves.

So add an extra dimension to your YouTube videos today, but for goodness sakes be careful not to over do it.

Day of the Tentacle – When an Evil Purple Tentacle Tries to Take Over the World!