Skip to content
You are here: Home > Platforms > Microsoft > Xbox One > The Xbox One Eighty – The Microsoft DRM Reversal A Backwards Step? 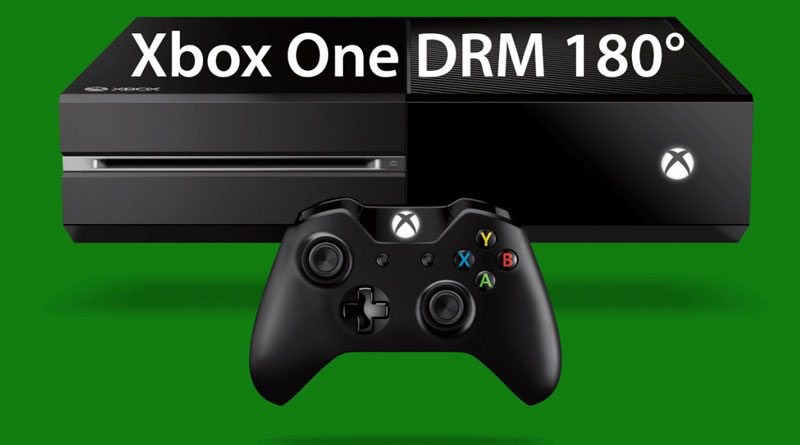 I have been a huge fan of the original Xbox and the following Xbox 360 consoles. They always felt one step ahead of the competition with the introduction of Xbox Live, Xbox Live Arcade, Achievements, Gamertags and more besides. However, ever since the Xbox One was announced back in May – the rumblings of discontent have been reverberating through every outlet where the community could be heard.

A series of completely unnecessary errors and outright gaffs on Microsoft’s part have damaged the reputation of the Xbox One and indeed the Xbox brand. What was one of Microsoft’s crowning achievements for garnering generous amounts of goodwill from the community, became tarnished almost overnight with the negative perception of Digital Rights Management (DRM) and the restrictions imposed when attempting to trade used games.

Microsoft have now reacted as a result of either Sony’s superb E3 presentation proudly stating their own unchanged used games policy or by the loud noise echoing down Xbox hallways via the angry community – possibly even as a result of both these aspects.

A series of completely unnecessary errors and outright gaffs on Microsoft’s part have damaged the reputation of the Xbox One and indeed the Xbox brand.

Yesterday, Don Mattrick (President, Interactive Entertainment Business) announced a reversal that has stunned gamers worldwide. Many are hailing this as a victory of epic proportions, while others a backward step that sticks to the status quo and fails to look beyond the horizon.

Regardless, here are the announcement highlights:

At first most of us cheered the reversal. We recognised the regained freedom that many of us felt was otherwise ignored with the Xbox One. What a victory for the community, proving that shouting loud enough can encourage even mighty corporations to change their mind no matter how intrinsic their ideas were to the future of their console.

You told us how much you loved the flexibility you have today with games delivered on disc. The ability to lend, share, and resell these games at your discretion is of incredible importance to you. Also important to you is the freedom to play offline, for any length of time, anywhere in the world.
Don Mattrick, President, Interactive Entertainment Business – Official Xbox News

Whether this is an actual backwards step, it’s hard to tell.

Certainly at this point in time, Xbox hardcore gamers breathed a sigh of relief as their beloved brand backed down and decided to remain with the tried and tested method of disk based media and used games. Every positive be it within the console specifications, the improvements within Kinect, the amazing looking Xbox One exclusives – all were drowned out by the outcry of the gamers and this simply couldn’t continue.

But let’s say you buy a game, a book, a CD, a DVD, whatever, and you want to sell it on — is that actually right? Is it a morally defensible thing to do? I’m not entirely sure that it is.
Xbox One: Do we have a moral right to sell used games? – Matt Baxter-Reynolds

In the long term, things become a little more murky as whether we like it or not – digital distribution is already here and has been for years. The only difference is it will creep up on us all more slowly no matter which system you eventually purchase be it from Microsoft, Sony or Nintendo.

For a console that possibly includes a ten year life cycle, Microsoft may still decide to wean us off the disk and into the digital world once we better understand the benefits. The fact of the matter is that Microsoft failed miserably to create a message that resonated with gamers and instead responded with such ridiculous gems including:

…fortunately we have a product for people who aren’t able to get some form of connectivity, it’s called Xbox 360″.
Don Mattrick, President, Interactive Entertainment Business – Engadget

Talk of a ‘Family sharing’ feature is now a distant memory and the ability to play any of your games on any Xbox One also forgotten. Two very tempting additions that would have had real value, but even at this stage I and indeed others are confused of exactly what it would have entailed. What other benefits might we have lost that were yet to be announced I wonder and depended on this idea?

My concern now is that it has been proven successful that if enough individuals shout loudly enough, changes may happen as a result. I hope this doesn’t stop innovation elsewhere, although if lessons have been learned from any of this – it is if you are making a drastic change to the user experience, the message has to be clear, concise and more importantly spot on.

Where was the video explaining the new features, the benefits and why we would all be happy to choose digital over optical? It just didn’t exist and in the end Microsoft dug their own DRM grave, whether the initial concept helped publishers and consumers or not.

Microsoft is back in the race, just very bruised and battered from the last few weeks.

For a company that has historically traded on giving users choice (note the number of ways to create new documents in Office), Microsoft is stumbling terribly lately with the Xbox One and Windows 8.