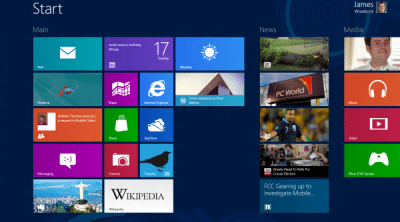 Ever since the Consumer Preview version of Windows 8 was released to the keen public who love to experiment with early software, the reaction has been extremely mixed. Microsoft have taken a bold step by removing the one constant that we have become accustomed to and that is the Start Menu.

With the release of Windows 95, the Start Menu has been sitting comfortably in the lower left corner of the screen and became the area to locate and run your applications. This was a huge improvement over previous incarnations of Windows and has been enjoying its position on our displays for many years – until Windows 8 came along.

Once you have entered your social connections to Facebook and other services, the Start Screen is transformed into a living breathing world of applications, interactions and live updates.

Windows 8 has totally removed the Start Menu button and now a full-screen application launching experience is awaiting you in its place known as the Start Screen. This one change has upset a wide selection of Windows users and is often confused with arguments regarding Metro, the new styling within Windows 8 that includes a new type of full-screen application designed primarily for tablets yet fully usable on notebooks and desktop computers.

It should first be noted that the desktop interface remains intact and actually sees many new features which result in a Windows 8 experience that is faster and more efficient to use.

Whether you like the idea of Metro full-screen apps or not, they are here to stay and can be used to your hearts content or completely ignored. Personally I love Metro apps and locking them into the side of the screen has proven immensely useful for viewing my latest emails, taking part in conversations and much more besides – all within my desktop interface.

So in short, Metro can be a part of your Windows 8 experience or even pretty much ignored.

The Start Screen is often lumped within this Metro discussion and the cries of users pushing for the now ‘classic’ Start Menu to return flood any popular post Microsoft create or those of third-party publications.

After quite a few months with the Consumer Preview and now the Release Preview, Windows 8 and its new interface has certainly grown on me. It did take adjustment while also learning new interface conventions, however within a few days I was up to full speed again.

When logging in to Windows 8, the new Start Screen presents itself in all its full-screen glory. At first, it looks like a small selection of rectangular options with possibly little to offer. Once you have entered your social connections to Facebook and other services, the Start Screen is transformed into a living breathing world of applications, interactions and live updates.

The rectangular objects are referred to as tiles and these make up the new Start Screen within Windows 8. Many feature live data from their associated apps. This can include information and even images that allow the tiles to present you with up to the minute notifications all within individual tiles.

The Mail app for example will display your latest emails, the Calendar app your next appointments and so on. Within a single glance, you can become fully aware of the ‘moment’. Desktop applications can also reside here, with their logo filling a tile – jumping straight to the desktop and launching the correct software.

All of these tiles can be ordered into sections, shrunk and expanded to whatever takes your fancy. Within time, the once basic Start Screen flourishes with content and more importantly ‘your’ content.

I however am not blind to the slightly jarring effect of switching from the desktop to Metro apps, which are set by default by Windows 8 when opening an image, music or video file. This can be customised to open applications of your choice that remain within the desktop, so it can be remedied with little fuss and not a reason alone to ignore or indeed hate Windows 8.

In conclusion, give the Start Screen a chance. It’s not an evil interface and actually I truly believe is a much needed refresh of what was becoming a cluttered mess within one small area of the desktop. It’s a living part of your life, customisable to show your interests and passions – the realm that identifies you and you alone with news, information and social connections. The Start Screen isn’t going away and now would be an appropriate time to wave goodbye to the Start Menu, it has served us well but with most things it is time to move on to pastures new – remembering the good times, yet recognising the need to push ahead.

Interesting – MS changes the UI, drastically, instead of enhancement.
And no matter what I do, I have a Foreign Language for the app titles. So far BING and Google turn up no easy fix of any kind.
Part of the problem with the new UI is the lack of how an end user interacts with it if there is no touch screen – everything is experiment…