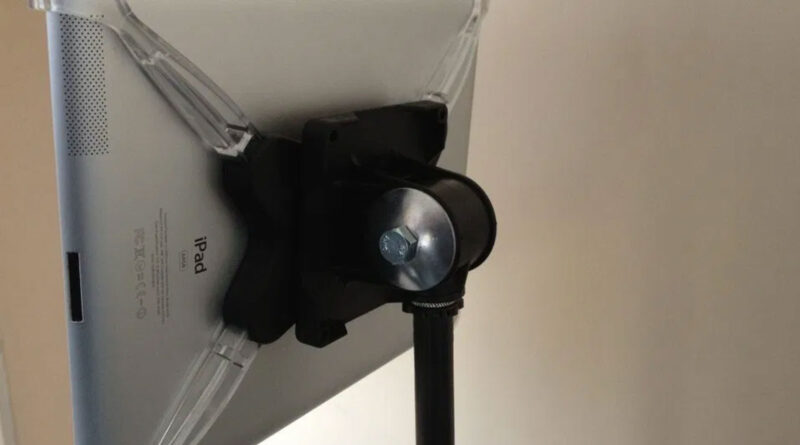 Sightread Ltd were kind enough to send over the The Gig Easy iPad Mic Stand & Side Mic Stand Mounts for review recently, which allow you to add an Apple iPad tablet to your existing mic stand.

For quite a while now, I have been using an Apple iPad to view sheet music and use as a Teleprompter for tutorial DVDs I have produced. In these scenarios and others, a method of holding the iPad in a certain position either close to a musical instrument or video camera is required and this presents a few problems. You can either ask someone kindly to hold the device or risk resting the iPad in a precarious state on a wobbly and possibly uneven surface. This is where The Gig Easy iPad mic stand mounts save the day, as I will explain…

If you already own a microphone stand, you are in luck as The Gig Easy iPad mount will require one of these to attach to. Mic stands aren’t very expensive and can be found from as little as £15 online and this will provide the robust adjustable base for these attachments.

The Gig Easy iPad Mic Stand Mount is a reassuringly secure method of attaching an iPad to a microphone stand.

Both the iPad 2 and the ‘new’ iPad (iPad 3) are supported within one version of the clip as both tablets share a very similar shape, while original iPad owners will need to choose the connector that is purposely designed for its larger dimensions.

Attaching the iPad to the device is simple. Firstly you connect The Gig Easy mount to a microphone stand where typically the mic holder would reside. Next inserting the iPad into the slots on the lower corners of the stand mount, pressing gently to set the iPad in the clear plastic spring-loaded corners. Grasping the upper remaining arms, you now pull outwards to place them over the iPad corners while carefully steadying the tablet into position. This firmly snaps the iPad into the mount by hooking over all four corners of the tablet.

Once in place, you feel satisfied that your iPad won’t be falling out and is indeed secure. The iPad can then be twisted and adjusted into a preferred viewing angle depending on your requirements. For digital sheet music viewing, a portrait set-up is ideal – however landscape may be better for other apps installed. You can also tilt the device and of course with the mic stand itself, adjust the overall height.

The whole design is pleasing and actually quite minimal without it going too far and testing your nerves at the same time. Let’s face it, we all love our iPads and the last thing we would want is to risk damaging it, especially when you are entrusting your faith into a mount meant to hold it separately from your caring hands. After using the device, I felt confident that my iPad was in no danger allowing me to relax as it sat within The Gig Easy mount.

The optional side mount extension arm adds additional value to the bundle, although the weight of the iPad can bow the metal ever so slightly – however this is only a very minor issue although worthy of note.

The Gig Easy iPad Mic Stand Mount is a reassuringly secure method of attaching an iPad to a microphone stand. With its versatile angle settings and careful gripping action, your Apple tablet will become an even more useful device as a result of the flexibility provided by such a set-up.

If you play a musical instrument or require an iPad to be held alongside other equipment without risk of damage, The Gig Easy iPad Mic Stand Mount is certainly up to the task and I am more than happy to entrust my new iPad with it. 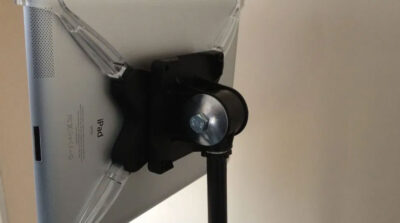