It is expected that games include a story line as a means to give the title a little edge, to display its epic credentials or just simply to help bolster descriptions – even if it all feels tacked on at the last minute. The Adventures of Timmy: Run Kitty Run features a plot that is the very essence and purpose of the entire game. You control a shy child named Timmy, who finds it incredibly difficult to make friends and to make matters worse, wears a cat costume which attracts unwanted attention from bullies.

Kitty, the prettiest girl in the school befriends Timmy, which outrages one of the bullies named Mitch. The bully grabs Kitty and runs of into his treehouse lair. Timmy must use his imagination to help bolster his strength and find the courage to follow Mitch and rescue Kitty – the girl of his dreams.

Quite a hard hitting plot for what is essentially a fairly simple iOS title, however the cut-scene animations rather than using this as a means to simply grab attention, instead defines the struggle of one timid child overcoming his fears. It’s actually quite poetic at times, yet at its core – The Adventures of Timmy: Run Kitty Run is an attractive platform title that is a pleasure to play.

You control Timmy by using a virtual on-screen controller on the left-hand side, which cleverly shifts if your thumb placement moves off the screen and back on again in a different location – similar to certain iOS first person shooters. The right hand side acts as your means to jump and climb obstacles, which has you hopping from one platform to another in typical fashion while carefully using the jump ability to reach ever greater heights. Jumping can be a little hit and miss though, with screen presses not always reacting to your command – plunging Timmy into all sorts of bother.

Along the way, enemies in the form of bizarre creatures manifest within the levels, which require you to leap over and land on their heads to remove them from the area. Some are certainly more tricky than others to defeat as there are those that slowly crawl along providing nothing more than a distraction from the platform hopping, yet others that will be alerted to your presence and in a crazed response dart towards you.

Three hearts represent your lives and are lost if a creature attacks you or one of the many obstacles including spikes, fire and pits touch you. These can be replenished by locating hearts as you progress through the level, but lose them all and you have to start the level from the very beginning.

With 4 chapters and over 36 levels, these short little trips across the nightmare landscapes challenge you to obtain ever greater high scores – comparing with other Game Center players from around the world and of course any of your friends who also play the game. Achievements can also be unlocked, adding extra incentive to progress even further.

The entire presentation is dark with a touch of scary, representing the fears of poor little Timmy. Even with this gloomy world, the artwork is simply gorgeous and wonderfully engrossing. The painful shrill of Timmy running out of lives is enough to shock you into silence, yet the pull of battling these nightmarish levels persist. The level design is a little predictable and the difficulty ranges from easy to darn right frustrating, but getting Timmy to the finish is an endeavour that is worthy and satisfying. I feel a little more variation could have been included to give the game a totally amazing experience, however there is still plenty available to test your skills.

The Adventures of Timmy: Run Kitty Run is an attractive title that offers tantalising and addictive gameplay, wrapping the nightmarish torment of what bullies can create as a timid child pursues with heartfelt persistence, earning courage along the way.

If you are looking for a platform game that includes a little quirkiness and provides many hours of fun, The Adventures of Timmy: Run Kitty Run is a worthy title to consider among your Apple iPhone and iPod Touch apps, with its challenging levels and strangely charming dark viewpoint. 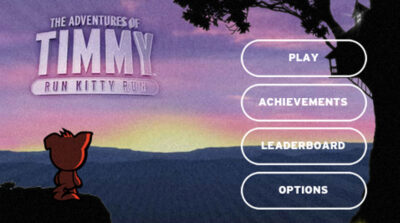