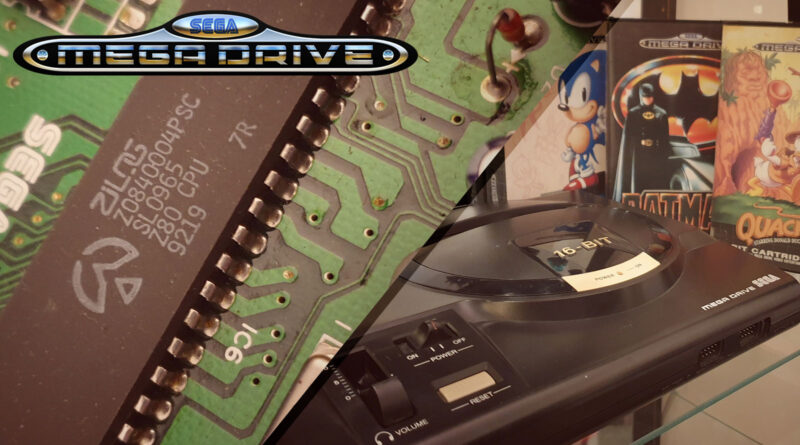 If I had to choose my favourite gaming console of all time, I would instantly grab all my memories from the 16-bit era and pluck out the SEGA Mega Drive. Although I adored gaming from the 8-bit world such as the Commodore 64, it was the Mega Drive that made it believable – that I could truly immerse myself in a world and really feel like I was controlling an actual character. If I was playing QuackShot, it was Donald Duck – not a basic pixelated representation, it WAS Donald Duck!

After purchasing my latest SEGA Mega Drive off ebay literally just days ago and arriving by Royal Mail this morning – it was time to open it up and see what nearly 30 years of use had left it in – and more importantly, have a little explore inside to see where the 16-bit ingredients resided.

My original SEGA Mega Drive was a Christmas gift from when I was around 10 years old. With a single game, of course Sonic the Hedgehog and one controller – it was a revolutionary experience for me, making the leap to the 16-bit universe. The graphics, sound and speed were phenomenal and thankfully I had no idea at the time that the PAL version of Sonic the Hedgehog ran so much slower compared to its NTSC counterpart. Ignorance is indeed bliss sometimes.

I sold my original Mega Drive to upgrade to the Acorn Archimedes A3010, a decision I didn’t regret, however more recently I wanted to relive the Mega Drive experience on actual hardware. After a little look on ebay, I came across a Model 1, a generation where it would sound more like I would remember as later versions would change some of the hardware enough for it to be audibly noticeable.

After unscrewing several screws and removing a pretty large silver casing on the inside, I was quite surprised. At first I wondered why there were stray wires soldered into the motherboard, however the fine folks over on Discord proved that this was expected for this generation as the initial designs were not totally perfect and required patching for it to function correctly. So not a mod, it literally left the factory like this!

…not a mod, it literally left the factory like this

The close to 30 years in existence was apparent once inside and the headphone port volume lever in its naked form seemed to be portraying a little shyness and caked itself in whatever it could find around it. In this case, a homemade fur coat – well, actually in truth a lot of dust, but effective in covering its inhibitions.

I also noticed the year 1991 on the motherboard, confirming its manufactured date.

The first chip I spot is the 8-bit Zilog Z80 CPU. This enabled SEGA Master System backwards compatibility. I couldn’t help but chuckle at the irony as I explore a 16-bit machine, however I wasn’t complaining as this compatibility also ensured the Mega Drive benefited from expanded music capabilities beyond the installed FM chip alone.

The 6 channel Yamaha YM2612 chip produced some of the most recognisable FM music of the 16-bit era accompanied also by the 4 channel PSG chip which came along for the ride providing the subtle beeps and boops from the Master System and featured heavily in the tracks of the Mega Drive.

Sonic the Hedgehog, Streets of Rage 2, Golden Axe 2 and many more besides all took advantage of both chips combined. When the music chips were in the right hands, it produced amazing soundtracks.

Finally we reach the 16-bit Motorola 68000 CPU. The CPU certainly isn’t unique to the SEGA Mega Drive and even the SEGA Saturn used it as a sound processing chip. It can also be found in computers including Apple, Atari and Amiga to name just a few uses of the hardware.

Blast processing was certainly used in marketing of the time as a way to cunningly explain the powerful capabilities of all of the chips combined that could show sprites at lightning speed. To now see the motherboard laid bare – it still feels magical even though some of the secrets are now revealed.

My SEGA Mega Drive all cleaned out works like a charm and will no doubt find itself in future articles and videos.