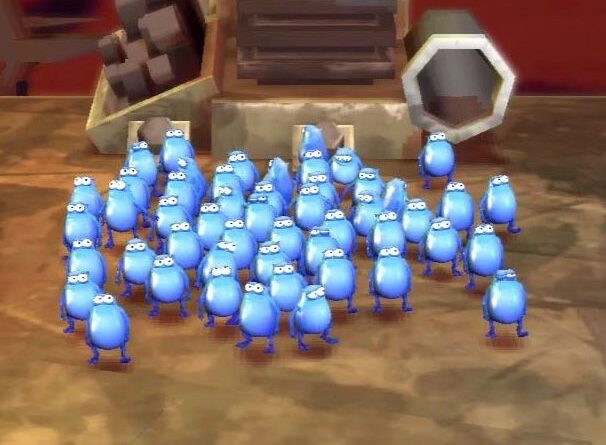 Ever wanted to take a collection (or swarm) of small blue creatures under your wing and guide them through a bunch of nightmarish challenges? Well now you can with Swarm available on Xbox Live Arcade and PSN for the Xbox 360 and PlayStation3 respectively.

Your first inclinations may be to compare Swarm to Lemmings and to a certain extent there are some similarities, however they are slight. Just like Lemmings, the destiny of these poor and quite frankly dumb creatures depends completely on your skills to navigate the horrors that await – the difference though is that rather than ordering one Lemming at a time, you are in fact commanding the entire swarm in one go. “With great power comes great responsibility” and if Spider-Man played Swarm, he would hang up his super hero costume in the wardrobe and sit down in front of an Xbox 360 for the rest of his life.

How you approach Swarm depends on you and your willingness to sacrifice a few Swarmites to reach bonus collectables and raise your total points for the level. Your eye will need to be keenly trained to target one area of the screen in particular and this is the section where your combo is displayed. By collecting little orbs that litter the level or appear after smashing crates and other objects, your combo increases. This same combo however will always be dropping like a rock therefore speed and your knowledge of the level will play a pivotal role in your success.

Don’t expect to complete a level of Swarm on the first play-through as this is a pretty rare occurrence indeed. Instead you will be required to learn all of the little nuances that will increase your score and avoid the traps and pits that will impede your progress and combo accumulation. The difficulty is immense joined with a very steep increase in pounding you with obstacles and problematic traps, where only at the very beginning are you shown the basic concepts of the game. Very quickly you are expected to look after yourself and this results in an immediate onset of frustration and agony.

Swarm behaviour, or swarming, is a collective behaviour exhibited by animals of similar size which aggregate together, perhaps milling about the same spot or perhaps moving en masse or migrating in some direction.
Wikipedia

Your swarm starts with 50 Swarmites, which as you pass ever closer to the traps soon reduce in number either diminished by explosions, fire, pits, mechanical vehicles and so on. They can be replenished when you reach certain points although if you lose all of your swarm, you go right back to the beginning of the level or a checkpoint and lose your combo advantage. Pads are found along your path that feature a stated number, so for example a pad that display 30 will require thirty Swarmites to activate it, that will open up more point scoring goodness. The risk though is that you often find yourself going back over previous ground with newly visible bonuses and you will have to practise hard to master the fine art of progressing and surviving.

By holding down the right trigger, your swarm huddles up into a tight little bunch. Repeated presses allows you to speed along quickly, while also pressing the left trigger creates a big ‘punch’ effect – perfect for destroying objects of point scoring interest. Holding the left trigger spreads out your group, which may be required to spare your Swarmites from a localised explosion that has the potential to wipe them all out if huddled too closely. When they are together though, you can also hit the jump button so they literally jump onto each other’s shoulders – allowing you to tower high usually out of reach wonderments.

As the game is quite short with only a handful of levels and bosses, it is all about replaying the same levels and increasing your scores – comparing against friends with the online leaderboards. There are plenty of awards for the various comical deaths you can endure within the game and DNA collectables to locate, but for 1200 Microsoft points it is a hard investment to entice.

The drab and dreary world with a bright blue collection of Swarmites make for a humorous trek from one level to the next, with graphics that give justice to the onslaught that appears on-screen – yet you are going to need a strong level of patience and grit determination to conquer all of the levels without feeling just a little frustrated. The action is thrilling while it lasts and the enjoyment of persistence does pay of in the end, although reaching that point is far too uphill for most.

Swarm is a charming title that brings the suicidal tendencies of small creatures to a whole new level with far more control than you ever enjoyed with a game like Lemmings. Controlling the whole pack in one mass is certainly a mind altering exercise as you analyse whether to speed along the various traps that litter your path or carefully tread between the many ways to die a quick and painful demise.

The pretty slim selection of levels, the insane difficulty with no steady learning curve and the quite steep initial price – result in a fear that Swarm may be overlooked by many, which is a great shame as the title holds so much promise for those willing to spend the time with these little blue companions.