Skip to content
You are here: Home > Gaming > Space Ace on Blu-ray Review 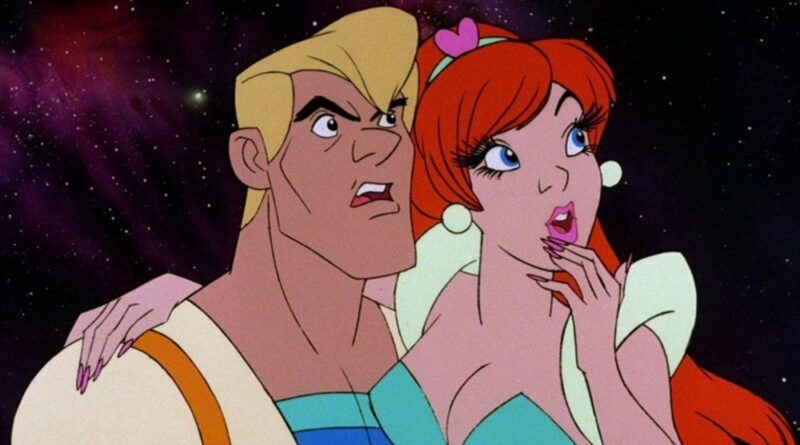 In 1984, gaming was still a mass of lines, solid colours and music that resembled nothing more than a beep ba da beep. We are stepping back to when the Nintendo Entertainment System (NES) was still a twinkle in Nintendo’s eyes, but out of this bleak realism, Dragons Lair surprised the world with movie like quality cartoon animation that you could actually interact with.

Following on from this huge success, Space Ace made by the same company, released not long after their first attempt into this new area of interactive movie based gaming. Boasting the refinement you expect with any subsequent endeavours at something unique. Although interactivity is minimal and freedom limited, Space Ace and other games from the same genre were no doubt an amazing transformation for gaming at that time. Space Ace has been re-released on many formats, however now we can experience a new remastered edition exclusively on Blu-ray.

No this is not just a PlayStation 3 game. You do however require a stand alone Blu-ray compatible player or of course you can use the trusty PlayStation 3 console. Another bit of pleasing news is that the game is region free and can be played without the stress of it not working if you choose to import from another country. PS3 owners can also use the standard controller rather than a remote control to enjoy Space Ace if they so wish and it is certainly the better option.

The principle is simple…

Space Ace is a large selection of animated video scenes, that are triggered on screen depending on your actions. The game will wait for a movement either up, down, left or right and there is also an action button. A correct action will result in another short video sequence continuing the story, however failing to move in time or selecting the wrong button will result in a different video altogether that will show your death. Lovely! With everything tied into video sequences, Space Ace therefore lacks the exploration we are used to today. You can’t wander around at all, however it still immerses you in the experience as it feels like you are actually controlling a movie. Well you are!

So no real exploration except for a few multiple path moments and certainly no time to hang around to ponder as this title requires lightning reflexes and the memory of an elephant. There are visual clues that give you an idea of which direction you should be pressing, but they happen so quickly you really need to be on your toes, otherwise a fast transition to a death animation will follow. The key is to remember what button presses work in the sequence and remember them. You will need the patience of a saint due to the frustration of dying over and over again though until you learn the sequence involved.

There is even a difficulty selection that will simply skip certain scenes to make life that little bit easier as well as options to have unlimited lives, display your score, display whether your command is the right one by showing a green light or limiting the game to 5 lives total (hardcore players only!).

You control Ace, your stereotype hero with perfectly combed blond hair, rugged good looks and an ego dwarfed only by his own large chin. Commander Borf is his nemesis, who unfortunately for you (although resulting in many comical moments) uses his Infanto Ray on Ace returning him to a much younger state known as Dexter, a gorky teen that couldn’t be more different to the heroic adult version. Dexter tends to get past difficult situations with lots of luck and accidental manoeuvres, but at least he means well and adds to the entertainment.

As with any story with adventure, you are trying to save a damsel in distress, Kimberly who has been nabbed by the evil Commander Borf and so our exploits begin in an amazingly fast paced, direction pressing, button triggering exploration of Space Ace. Fighting robots, avoiding laser fire and flying space craft all feature in a rapid action packed title.

Remastered in 1080p high definition (using the MPEG-2 video codec for those curious), Space Ace can be played in the original aspect ratio or in widescreen. Compared to other older versions that have been released, this is certainly the definitive edition as far as visuals are concerned. There is also Dolby Digital 5.1 surround sound to further immerse you in the world. As each command triggers a video response, there is a lot of jumping around the disk for information, but thankfully on the PS3 the breaks are incredibly short and don’t impact negatively on the game. Your surround sound system might have problems keeping up, but otherwise a pretty flawless romp from start to finish.

There are some nice supplements on the disk including interviews both picture in picture and seperate videos as well as a comparison of the formats Space Ace has been released on in the past, that will surely convince anyone that this latest addition is by far the best looking of the bunch.

If you remember the original and adored it in the 80’s, you will no doubt want the definitive version in glorious re-mastered high definition right here, however if you are new to this type of game, your patience will no doubt wear a little thin with the countless repetition and lack of exploration.

Looking fantastic, Space Ace is a triumphant return of a true gaming peak in the time line. My only fear is that only the nostalgic souls will give this classic a go and even then the basic premise behind this type of situation will soon become nothing more than invoking happy memories.

These types of games are dead for a reason, but we should never forget the intensity of life and excellence these titles once brought to the arcades and beyond. They were truly inspirational for so many gamers and although their brightness has dimmed over time and the technology limited, the legacy will never be forgotten. 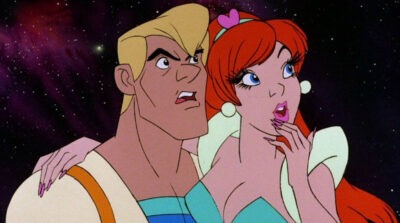 :d this is on dvd witch will play on any format even a dvd player with the remote for a controler.
good game, but bad game play.
same as dragons lair made by disneys own artists just after they all quit disney