I remember watching a video before the Sony PlayStation 3 launched, where Phil Harrison excused the lack of vibration motors in the new controller by saying something along the lines of it was just so last generation and that Six Axis (motion sensing) is where we all should be focusing. So the only rumble we noticed was the negative press surrounding this omission as the entire gaming community sighed in disbelief.

Never fear though as finally Sony are releasing (have already released in Japan) the DualShock 3 controller that features both Six Axis and more importantly rumble.

Regardless of how Sony tried dismally to cover up the fact that they were being sued for using this kind of technology and then giving us poor excuses, we can now enjoy what any console should feature.

Ever since enjoying the add on packs you could purchase for the SEGA Dreamcast, rumble has been a part of my gaming life for years now. Without it feels like a detachment from the entertainment system, missing out important cues of being shot at, touching the side of a racing track or sensing the surrounding dangers.

As you would expect the DualShock 3 is slightly heavier with the extra parts inside, but this is still far lighter than the Xbox 360 controller. The dimensions, button quality, layout and design is exactly the same and the only difference you will notice is the DualShock 3 text at the rear. The vibration feels spot on from previous incarnations of the controller on the PlayStation 2, so nothing really to dislike. 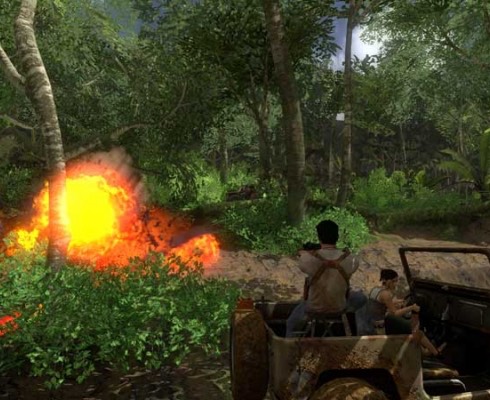 Some of the games released at launch are even becoming compatible with the new rumble feature of this controller, so titles such as Motorstorm will benefit as well as a huge list of others. After completing Uncharted: Drake’s Fortune recently without controller rumblings, it was nice to go back from the beginning and experience the change. Rumble can actually immerse you in the gaming world and you don’t realise how much until you separate yourself from the technology again. The days are gone when rumble was considered a gimmick, as it is now an integral part of story telling, triggering player reactions and all out thrills.

Sony have at last made up for their silly stance at launch and conceded to the PlayStation 3 community of their errors. Rumble is back, rumble is king and rumble should now stay forever hopefully or face the wrath of the consumer.