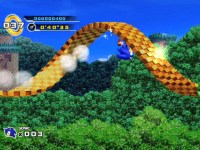 The first time I experienced Sonic the Hedgehog was on the legendary SEGA Megadrive (Genesis). Unfortunately if you wanted to get your 2D fix of our little blue spin-dashing friend, you had to either purchase the original classics from services on all the current gaming consoles or try out the portable hand-held versions. The 3D variants of Sonic the Hedgehog have been extremely hit and miss and although Sonic Adventure on the SEGA Dreamcast transitioned fairly well into this new perspective, the Xbox 360 next generation revamp was a total disaster.

I am sure many of us have been badgering SEGA and in fact anyone who would listen, to create a 2D or at least a close to 2D, modern version of Sonic that we could love and even adore from the comfort of our sofa and admire on our high definition television screens. Project Needlemouse has teased us for months with promises that has even made me giddy with excitement and now the latest news has been released stating that Sonic the Hedgehog 4 – Episode 1 will be released in Summer 2010.

SEGA® Europe Ltd. and SEGA® of America, Inc. today announced the first game developed specifically for the download market from the world’s fastest hedgehog. Sonic the Hedgehog 4 Episode I will be available via download on Microsoft XBLA, Sony PSN and Nintendo WiiWare, bringing with it the addictive classic 2D side scrolling action that Sonic fans have been waiting for.

Sonic the Hedgehog 4 Episode I offers sublime 2D gameplay through beautifully rendered HD environments. Fans will be able to speed through each level with the classic Spin Dash move, and destroy enemies using the Homing Attack. Sonic the Hedgehog 4 Episode I sees the return of the much-loved special stages and takes players through a variety of different Zones, all inspired by the Mega Drive era.

Each level from Sonic the Hedgehog 4 Episode I is separately selectable from the main menu, making it easy for players to replay their favorite sections as they wish. Long time fans will not be disappointed as they rejoin the action and face all new intense boss battles against everyone’s favourite villain – the ever devious and evil – Dr. Eggman!

Very much looking forward to this. Glad to see they’ve opted for the 2D perspective. :)

Will this be available on iPhone as well? If it is, that will surely double the excitement! I just hope Sega didn’t screw it up this time, and the episodic thing, not sure if I like it.

I don’t believe anything has been announced officially for the iPhone, but it wouldn’t surprise me if it did receive a similar version.

There are rumours that there will be one…

cant wait for this, i hated the 3d installments

Sonic Adventure was very good, but you can’t beat the 2D versions :)