After watching Disney’s animated tale ‘The Princess and the Frog’ recently, my respect for the little green amphibian has certainly increased. Therefore when asked to review the unrelated frog flipping game ‘Slyde the Frog’, which is free and ad supported for the Apple iPhone and iPod Touch – I had a pleasant vision of what could lay ahead. The aim of the game is simple, however the skill level required to pull it off will require lots of practise and oodles of patience.

Imagine app classic ‘Paper Toss’, although this time replace the piece of screwed up paper with a frog and instead of a waste paper bin as your target, imagine lilly pads. This pretty much sums up Slyde the Frog, but there is a little bit more to it than that.

With his gear on at the ready, Slyde’s sole purpose in life is to flip himself onto lilly pads where all manner of goodies and perils await. Flies are the main appetiser and when landed upon (which results in a nice snack for Slyde) it completes the level when they have all been eaten. Also expect female frogs awaiting your company for a little point bonus. It is not all good news for Slyde though as these lilly pads are not serenely floating on top of a still lake, instead they rest in a dramatic pond rotating at various speeds making aiming very tricky indeed. Lilly pads can also hide sinister traps including spikes that disappear and appear with frequency making timing just as important as targeting.

You can push your skills to the limit by aiming for quirky areas of the water or the wall that highlight special abilities. Within some of the levels, a point in the water may indicate that you can land there and before you know it you will appear within a bubble – floating above your prey which allows you to physically move your iPhone or iPod Touch to hover over the target area of your choice and then popping the bubble to land. You can also bounce off the wall if there is a target indicated and certain lilly pads also allow you to land there and bounce in a particular direction, indicated by an arrow. The point of all of this is of course to increase your score as you only have a limited amount of lives and at the end, any remaining lives will add to your overall points.

Flipping Slyde is just a matter of sliding your finger over the screen in the direction you would like and the vigour of your gesture applies the amount of power. That certainly seems simple enough I know, however in execution even the slightest error will see Slyde leap perilously into the wall or land in the water resulting in a life wasted. With practise, it does become a little easier but the difficulty can be quite brutal even with the simpler levels available.

Slyde the Frog features Game Center integration and you can also post high scores on your Facebook profile if you really wish to show off your frog flipping prowess.

The animation is pleasant, the levels fairly varied, but it is the lack of addictive qualities that really lets it down. Slyde the Frog just doesn’t leave you wanting more, which is a problem for a game that relies on you loving the free selection of 15 levels in the hope you will purchase more. Add to this the fact that at regular intervals the game will remind you there are purchasable add-ons for sale, leaving Slyde the Frog desperate for your attention with very few takers.

Slyde the Frog takes many of the basic principles of the classic Paper Toss game and replaces key elements with a frog, a selection of varied targets and a pretty intense difficulty level. Unfortunately this high difficulty standard is very frustrating right from the very first level. With what appears to be perfect finger stroke, the result can often catapult your new frog friend into the wall or almost everywhere else except where you want him.

It can be fun on occasion as there are ideas within the title that do appeal such as the special targets, however it fails to really grab your attention completely and instead pushes oh so very hard for you to purchase additional content which for most people will have completely opposite effect as nobody likes to be bothered with such frequency. 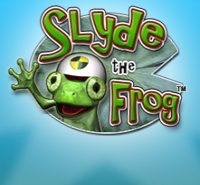