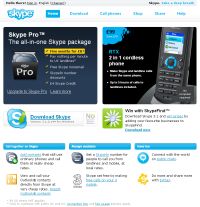 As someone who still is addicted to Skype for keeping in touch with family and friends, version 3.1 was released yesterday with a few minor additions. For those though who like to use the text chat as opposed to the primary voice, a new feature has appeared…

For years applications like MSN Messenger and Yahoo! have enjoyed the visibility of showing to the other person when you are typing a message to them. This is something many Skype users (including myself) have been requesting for some time now, and finally it is available. This I have highlighted with a red arrow (good old Microsoft Paint!) to indicate how daft and small they have made this, but it is a very welcome addition to the feature list even if it is less than obvious.

A couple of other features including SkypeFind:

Designed to be a community-generated guide, SkypeFind lets users rate, review and log their favourite businesses no matter where they live. Since launching in Beta three weeks ago, SkypeFind has attracted more than 4500 listings in over 124 countries and expects these listings to increase to over a million by the end of the year.

Also launched today is the Beta release of Skype Prime – a new marketplace which brings together those people who have expertise or knowledge to sell with others who are seeking advice and happy to pay for it. Skype was built from the ground up and Skype Prime is no exception and is in the very early stages of its lifecycle.

Interestingly, Skype 3.1 for Windows still only officially supports 2000 or XP and not Vista, although I am running Vista Home Premium and all is running very well.