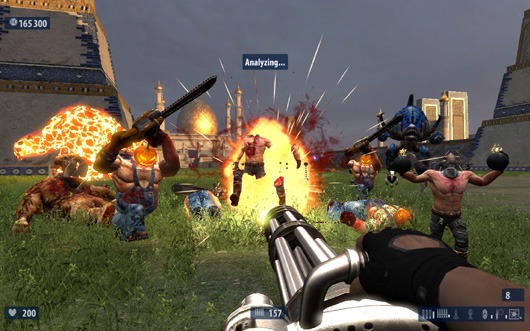 Serious Sam first appeared on the PC platform and back then, it was attempting to recreate the thrill of multiple enemies and a frantic pace that Doom often represented, but not only did it achieve this goal, it also stretched the limits of the graphical hardware of the time. Serious Sam has always been about slaughtering enemy after enemy, whose only goal is to destroy the likes of you. This slaughter continues in the second encounter (appropriately named title you see!) as Sam seriously kicks the living daylights out of a world of chaos and bizarre alien creatures.

For newcomers to the series, Serious Sam is a crazy imaginative world with real-life environments littered with enemies that are suitably placed in your worst twisted nightmares where a beer and curry may have been involved not moments earlier. There isn’t much of a story, all you need to know is that you are tasked with the unenviable challenge of travelling through various ancient locations, battling the continuous hordes of enemies that appear from literally out of nowhere to crush your optimism and chances of victory. The HD encounters of Serious Sam are visually updated classics that were extremely popular in their time and absolutely no reason why they shouldn’t garner the same levels of anticipation right now either.

Unlike the original Serious Sam adventure, where ancient Egyptian monuments littered the vast landscape settings, the second encounter aims squarely for the crumbling Mayan ruins of South America, towering ziggurats of ancient Mesopotamia and the savage realm of Medieval Europe. This actually provides a more lush surrounding than the sandy sights of Egypt, which are now replaced with sweet green grass, coating for as far as the eye can see with a few collapsible trees.

Although the scenery may have changed, the lust for blood spilling exploits with enemy numbers fast approaching manic levels continue in earnest. Your favourite weaponry from the original title also appears with a few more additions for your enjoyment. The chainsaw for instance may be more recently associated with games like Gears of War, but actually it has featured in titles such as Doom and of course Serious Sam much earlier in the gaming time-line. Oh and don’t worry, the satisfaction levels are just as high when thrusting this sinister item of mayhem straight into your foes.

It won’t come as a surprise that in these modern times, there are both single player and multi-player features contained within Serious Sam HD: The Second Encounter. For those who love a bit of solitude in their life, Campaign more obviously provides the necessary level progression and excitement. A slightly different slant is available among the ‘Survival’ levels. Survival has you sitting within a pretty small area and your defensive skills are pushed to their very limit as you battle off the various creatures that attack you continuously without pity. Eventually you will indeed die, but how long you survive is all part of the course in this addictive mode. You are not totally left with your basic weaponry and in fact you can also utilise massive guns that poke out of the scenery when things are getting a trifle overcrowded. Their automated support although obliterating is not a permanent feature, so use them sparingly by firing at the required targets that reveal their awesomeness.

Xbox Live is full of modes to select from and you will certainly not be left wanting. Co-operative play is featured, so you can always nip back to the hellish levels from the campaign where you may have struggled but crucially this time with support from your chums on Xbox Live. Facing the computer controlled enemies may not always rock your boat though, so ‘Versus’ offers a decent selection of options including the typical Capture the Flag, Deathmatch and many more besides including modes where you not only defeat the enemies but also each other in a point scoring exercise.

If you are craving a seriously good time, Serious Sam HD: The Second Encounter on Xbox Live Arcade fulfils your lust for carnage on an absolutely massive scale. Wave after wave of enemies will come bearing down on you and unless you are equipped with a tour-de-force collection of weaponry and guile, annihilation will be your only reward for your pitiful attempts.

It may be a gaming classic, but the modern enhancements bring it bang up-to-date with splendid visuals and a fast unforgiving gameplay that shouldn’t be missed.

Windows 10 Hands On – The Start Menu is Back, Start Screen Evolves