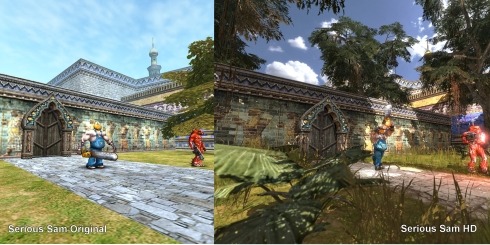 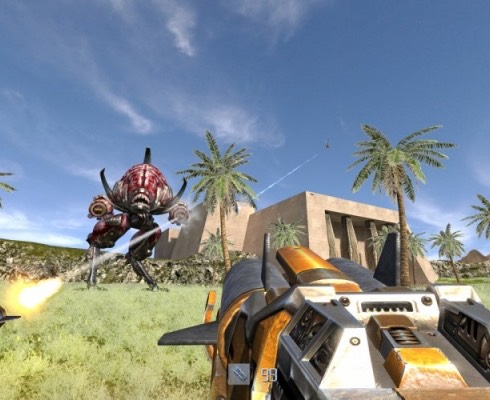 Serious Sam first appeared on the PC platform and back then, it was attempting to recreate the thrill of multiple enemies and a frantic pace that Doom often represented, but not only did it achieve this goal, it also stretched the limits of the graphical hardware of the time.

Serious Sam has always been about slaughtering enemy after enemy, whose only goal is to destroy the likes of you. The introduction explains that in the 21st century, mankind discovers the remains of an ancient technologically advanced civilisation which existed pre-dating humans. After travelling the stars thanks to the technological developments created from this find, in 2104 they are attacked by vicious beings from another dimension. Nothing can stop the influx of these hideous monsters as entire planets are defeated around the solar system and now Earth is under attack. It is left to our hero Serious Sam to use an artefact called the Time-Lock, which sends him back in time to create a better future.

Actually the story makes little difference in the grand scheme of things and tries to add a reason for this crazy world you find yourself in. The pure genius aspect of Serious Sam is due to the gameplay that was made possible thanks to the software.

Today we often take for granted the number of enemies that can be displayed on screen at any one time and the level of depth we can admire in the distance when situated in outdoor environments, but when this title first appeared Serious Sam was one of the first titles that blew away the limitations of the hardware with a fantastic game engine that allowed for epic battles in first person shooters that were never before achievable.

The world of ancient Egypt is synonymous with history, legends and of course the amazing architecture that pyramids and hieroglyphs present lending a fantastical playing field of over 14 levels for Serious Sam, a bunch of strange yet amusing monsters and a range of destructive weaponry to wreak destruction. 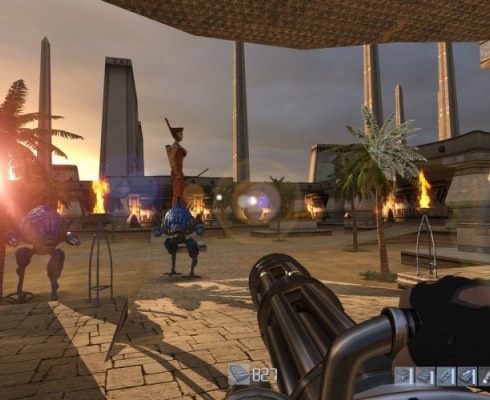 Your enemies range from men with a simple firing weapon that have the manoeuvrability of a snail, to monsters that are as tall as the highest pyramids towering seemingly miles above you. In-between are a bizarre collection that must have been created by a twisted imagination and far better for it. Monsters with just a torso for example can fly around and attack you, with mouths at the ready to tear out a chunk of your tasty flesh. Mechanical robotic like creatures that spew bullets and rockets, men without heads charging and screaming with a bomb in each hand homing into your position not to mention the skeleton like creatures that run and then pounce on you and many more besides. These all sound horrific enough, but then you have to imagine further on in the game when these combined together in staggering numbers all decide to converge on you at once. Thankfully by this point you will be better equipped for such an onslaught.

A pistol, dual pistols, shotguns, rocket launches, grenade launches futuristic laser designs and not forgetting the portable cannon ball weapon. Depending on your attacking foes, each will have their advantages and disadvantages, but all pack a pretty mean punch. Early on in the game you will be very conservative in your ammo use and will strafe from side to side in a delightful battle of ballet. This soon transcends into chaos as the waves of destruction target Sam and then it’s a matter of firing all over the screen and dodging a firework display of ammunition and terror heading only in your direction. 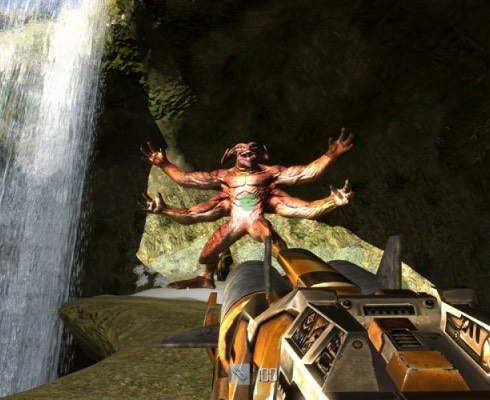 Levels vary from indoor sections, that has you pressing buttons, locating hidden rooms and often being locked in with a world only experienced previously in your nightmares to outdoor vistas that span greatly into the distance providing a plain that opens up to carnage on an unprecedented degree.

All in all, its just utter bonkers as you race around firing at anything that moves and keeping on your nimble toes darting around the landscapes away from all this mayhem. It is pure and simple fun that drags you into a world where your only thought is survival. You don’t care about why you are here, who you are and what the future will behold if you should not succeed. Your only interest is kicking some serious backside out of these most ruthless and unforgiving enemies and for me, that is all you require to adore this title.

For those who crave co-operative play online, will be happy to learn that 4 players can team up and tackle the Serious Sam world together. It is far easier to complete the levels this way, yet you will often increase the level of difficulty to insane levels as you will miss the intense action.

Serious Sam did appear on the original Xbox with new cut-scenes and carefully placed save points. None of these exist in this purely true to the PC original revamp. Saving can be triggered anywhere you like with just a tap of a button and for a game this hectic you will praise this return.

Serious Sam HD: The First Encounter is not an old title with a few graphical tweaks here and there so they can make a few extra pounds. It genuinely feels like it’s received a lot of love and attention from the developers in getting this old work horse back into line with modern gaming. Powered by the new Serious Engine 3, far lusher environments can be visualised with impressive high resolution textures, eerie lighting and re-skinned models.

For an Xbox Live Arcade title, you can forgive a lot graphically as you understand it doesn’t have a shiny DVD disk to store all its data on, however Serious Sam HD is a very pretty game compared to any retail title and even those who know the original inside out will more than likely wander up to an increased wall texture detail or check out the flickering lighting to admire the increase in graphical fidelity.

The frame rate even with all the on screen madness copes admirably with just a slight chug now and then. There is a little bit of jaggyness here and there, but it proves to be only a slight distraction from the overall beauty of this reinvigorated game.

For all of the enhancement elsewhere in the game, the audio remains completely faithful to the original. As far as I can tell, there are no new sound samples or music to be found to add extra vigour to the experience, instead all the shouts, screams, shots and movements hark back to over a decade ago. So of course the next question is does it actually require a boost in this department?

I would suggest no it doesn’t. The atmosphere you need to enjoy Serious Sam HD exists already so why tamper with what isn’t broken. The music is dynamic, which essentially means it will alter its pace depending on your battle situation. If you are just wandering around than a faint tone will encourage your senses to expect trouble, yet surrounded by enemies the tempo quickly increases to reflect the terror on screen.

Serious Sam is troublesome on ‘Normal’ difficulty, so even if you complete the game on this standardised level, you can ramp up the pain to serious effects to add extra gaming hours to this title. Unfortunately there is currently no Deathmatch option available, but you do have an immensely enjoyable single player campaign and 4 player co-operative.

Achievements as always offers a lending hand to offer challenge with a reward. These are not your typical complete level 3, complete level 5 shenanigans, instead they entice you to push ever deeper into this magical world. 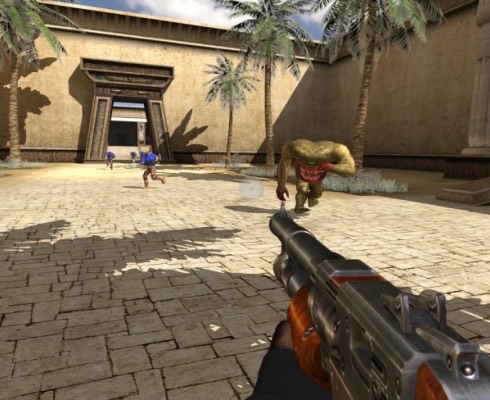 Serious Sam HD: The First Encounter for the Xbox 360 is a return of a classic. It may seem a little dated by some, but I personally believe that for both newcomers and nostalgic gamers like myself, the HD remake that is now available still provides a wonderful experience in terms of both speed and adrenaline pumping action. The enhancement really does bring Serious Sam far closer to visuals we know and love from more recent titles, but what really counts is the gameplay that remains one of the most fun pursuits to ever exist in our gaming history.

Some people may over analyse Serious Sam HD and suggest this is a title from an ageing era simply given a fresh splash of paint, however it is not just a revisit to a pleasant folly, but an awakening of one of the true gems to ever grace the gaming arena. Ignore this one at your peril!

My Article and Audio CD in Yamaha Club Mag