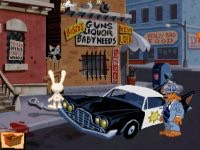 Today, I have recorded nearly 20 minutes of footage while enjoying Sam and Max Hit the Road on ScummVM.

This classic point and click adventure brings back a lot of wonderful memories from when I first experienced it nearly twenty years ago.

Sam & Max Hit the Road is a graphic adventure video game released by LucasArts during the company’s adventure games era. The game was originally released for MS-DOS in 1993 and for Mac OS in 1995. A 2002 re-release included compatibility with Windows and Amiga. The game is based on the comic characters of Sam and Max, the “Freelance Police”, an anthropomorphic dog and “hyperkinetic rabbity thing”. The characters, created by Steve Purcell, originally debuted in a 1987 comic book series. Based on the 1989 Sam & Max comic On the Road, the duo take the case of a missing bigfoot from a nearby carnival, traveling to many Americana tourist sites to solve the mystery.

LucasArts began development of the game in 1992 with the intention to use new settings and characters after the success of the past Maniac Mansion and Monkey Island adventure titles. Series creator Steve Purcell, then a LucasArts employee, was one of the lead designers on the project. Sam & Max Hit the Road is the ninth game to use the SCUMM adventure game engine, and also integrated the iMUSE audio system developed by Michael Land and Peter McConnell. The game was one of the first to incorporate full voice talent for its characters; the two titular characters were voiced by professional voice actors Bill Farmer and Nick Jameson.

The game received critical acclaim on release, and was praised for its humor, voice acting, graphics, music and gameplay. It is now regarded as a classic point-and-click adventure game and is often listed in publishers’ lists of top games of all time. Several attempts to produce sequels were cancelled, ultimately resulting in the franchise moving from LucasArts to Telltale Games.
Wikipedia

Touché: The Adventures of the Fifth Musketeer Enhanced Soundtrack Released for ScummVM

My Beneath A Steel Sky Enhanced Soundtrack Version 1.0 Released for ScummVM