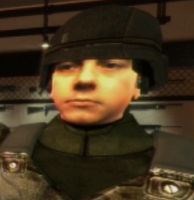 Virtual worlds are certainly nothing new and creating replicas of how you look again has been done before, but adding your real face onto an Xbox 360 character that Xbox Live users from around the world can see?

With the recently released Rainbow Six Vegas and the Xbox Live Vision Camera, you can actually scan your face into the game and see some very impressive results. Pictured on the right is actually my virtual character with my face mapped on.

I must admit at first as excited as I was, seeing myself shot or blown up by a grenade was a weird sensation. Now however there are so many of my friends scanning their faces in, it has become a great addition to Xbox Live and I really hope more games will take advantage of this. The only thing that worries me is the fact I will have to scan my face each time for every game that supports it, but the rewards are interesting and no longer are you just a bunch of polygons, but an actual representation of yourself.

I am sure some people are going to find problems with having a virtual image of yourself in a game that involves bloodshed, but just remember it is a game and indeed optional!

The Xbox Live Vision Camera could and should be used much more in the future and this adds a whole new personal way of interacting with friends and strangers. Just like the voice communication where most of us started off very quiet until getting used to having a conversation within a game, the same will hopefully be the same with the camera. No more faceless people is a great plus for those who want a more personal experience.

I just wonder how long it’ll be till we just have avs running around with ‘hilarious’ pictures of their unmentionables for a face :P

Well seeing as its looks for your eyes and mouth to work out how to place the image, I doubt it is possible. Remember though there is always the feedback and complaint options for those who somehow get an image that is inappropriate.

I heard it was good on the poker game, but I hope this doesnt come under the ‘main features’ or ‘new features’ on the back of the vegas box, its nothing that great.

P.S. I dont have skype but can I submit questions/topics using the contact form?

You don’t need Skype, you can ring 0207 193 3092 (UK) or if you wish you can email me using the contact form. I do prefer the voicemail though as it has a more personal feel.

If it is gaming related, will more than likely appear on the Console Monster Podcast I am hosting at the moment.

How does the game play, better than the last one which was a total let down and how does it compare to Gears of War which i think is absolutely the best game I’ve played on a 360 so far.

Rainbow Six Vegas is a massive improvement over Lockdown (or letdown as some people have called it).

Compared to Gears of War graphically although using the same game engine doesn’t compete, however the graphics are still incredibly impressive in the single player.

Online the gameplay is far more like Rainbow Six 3 or Black Arrow on the Xbox which is a relief for many including myself, but the graphical level drops quite dramatically.

Anyone who loved Rainbow Six 3/Black Arrow should purchase this for the Xbox 360!

I think Rainbow Six even surpasses Gears sometimes, like in the first “Border Town” level, it’s very well done. It’s just a lot harder to make square bright clean rooms look more realistic than dirty dark alienshaped rooms. If you go close to a car wreck in Gears it looks just as square as any other game there is… it’s the overall atmosphere (lighting and such) Gears generates that makes it stick out.

I’m glad this option has been implemented, I had worried they’d clamp down on this option ever since the N64 stopped it. hopefully the next step will be live feeds so you can see their reactions.

Seems like Vegas is really picking up a head of steam. I love playing co-op:
http://gamepeople.wordpress.com/2006/12/07/vegas-baby-part-1/

I personally love the game and think that it is even better than Gears in some respects, but if you have hair that covers your ears or even somewhat long hair the face scan option does not work. Good idea though.