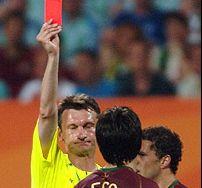 I decided to watch the Portugal Vs Holland World Cup 2006 match yesterday, as the winner of that game would be playing England next (the team I am supporting). It wasn’t a fascinating match for actual skills in the art of football, instead it was an advertisement for all the dreadful areas of the sport.

Both teams finished the game with nine men after a game which equalled the World Cup record for bookings – 16 – and broke the record for red cards. Deco and Costinha were dismissed for Portugal, while Khalid Boulahrouz and Gio van Bronkhorst saw red for Holland. Maniche scored the only goal, firing into the top corner after 23 minutes.

There is very little you could say about the fixture that would be positive, from spectacular diving as some of the players looked for free kicks or even worse penalties, to surrounding the referee pushing for greater punishments on any foul. Although some of the players behavior was far from sportsman like (remember these players are often role models), the referee didn’t help the situation by showing his ‘yellow’ card at every small indiscretion. In fact the referee made a farce of the sport most of us in England love, as it became more and more like a circus than a serious world football tournament.

It was a sad day for football! Although England is through to the next round, so something to smile about there at least.

It kind of made me less of a fan of Portugal, which I’ve always been. I’m still voting for Argentina to go all the way :d