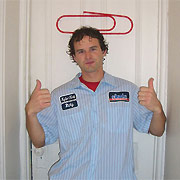 The Internet is full of success stories and of course failed dreams, however one man has taken an interesting approach in using this technology by swapping seemingly small items to eventually getting a house in return:

A 26-year-old Canadian who started with a paper clip has managed to barter his way up to a new house. Kyle MacDonald made 16 trades in almost a year using the Internet to achieve his target. He is now due to become the owner of a three-bedroom home provided by the town of Kipling, Saskatchewan.

The aspiring writer first advertised on an Internet barter site wanting something bigger or better for his one red paper clip. He managed to trade it for a fish-shaped pen and then exchanged the pen for a ceramic knob.

It just shows you how the Internet is full of bizarre twists and turns that can lead from something as simple as a paper clip to an actual house. One thing is for sure though, you aren’t going to look at paper clips in the same way ever again.

Link: Paper Clip Into A House