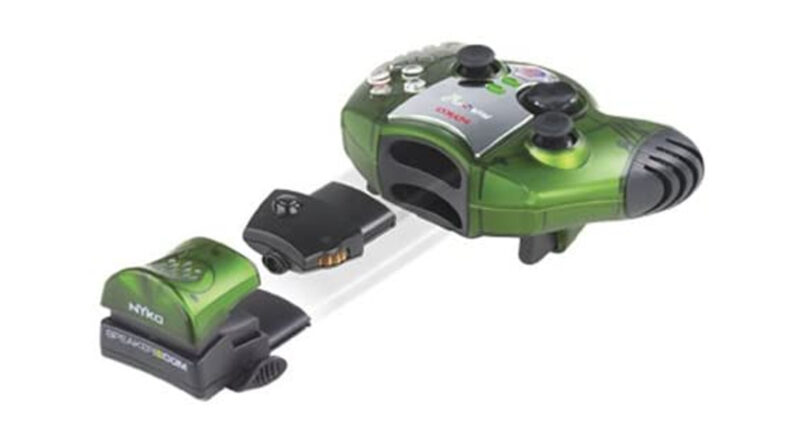 Nyko has already impressed me with their Air Flo EX Controller for Xbox which proved that serious solutions to common problems can be found. With this mind set they have brought something very interesting to the arena of Xbox headsets for Xbox Live.

No I don’t actually mean they have made a headset, but instead a nifty little device that sits on top of your control unit of your headset, but removing the need for the headset itself. Built into the SpeakerCom unit is of course a speaker and microphone which is perfect for users who need something a little different.

Ever have that moment when your friend comes round and you are all excited in showing them Xbox Live and the fact you can chat and play with your mates online? Well one problem that crops up is you only have one headset requiring you both to take turns in chatting online. One is chatting away while you without the headset sits back and frantically ponders on whether they are talking about you.

Thanks to SpeakerCom you can eradicate this problem. The unit has a little speaker which to my shock creates quite a punch. It is LOUD and make no mistake you will be able to hear clearly and crisply what is being said. You can still adjust the volume as at the side of the device you can still access the headsets controller as with the possibility of so much amplification, the odd screamer and shouter that enters your room will require some adjustment.

The mic is cleverly situated just beneath the speaker and works well at a reasonable distance. You do not have to move the controller close to your mouth just because the mic is sitting there. You can comfortably chat away at your normal controller distance knowing full well that your online buddies can hear you without a problem.

One of the things that may puzzle users at is the way you operate the device. By this I do not mean it is complicated to use, I actually mean the way you talk and listen to people. To speak you have to press one of the buttons to the side of the unit of which you have two to choose from. By pressing either one of these well placed buttons. Well actually they are more like little levers, but when pressed it mutes your loudspeaker so your friends do not hear themselves echo and you can talk almost like operating a walkie talkie. This does cause a little confusion as you may miss somebody’s sentence if you click too soon or too late. Maybe even if you have friends that refuse to shut up and continue to talk over you, you will miss their conversation completely. I understand why they have had to do it this way, but it makes life a little bit more of a pain. For example as I write this review I am chatting to one of my staff members on the Xbox Live Dashboard, trouble is I have to stop typing to respond to press the button. Not exactly hands free.

During a game it can also be a little tricks if like I was earlier testing the device playing Top Spin and mid rally your opponent asks a question. You can not without affecting your rally press the button. A small niggle, but one to note.

This aside the device is a great idea, definitely more so if you have friends around your house who want to join in the conversation as well as playing the game. With a very clear loudspeaker and simple to operate design, you can not go far wrong if you like something a little different to having a headset around your head with that wire tangling all the time.

Another good use for this device is when you have your 5.1 surround system fairly loud to hear either cars behind you trying to overtake or enemies in Rainbow Six trying to sneak round to you. These games require a little volume in 5.1 so you can maximize your skills in the game. This creates the moaning of others in the room saying you have your volume too loud and they can hear every grenade, car screech or other piercing noise present in the game. Using SpeakerCom seeing as you have to press the button to turn on the microphone, you can have it almost as loud as you like. Just unmuting to give quick instruction or even better taunting.

To use the device you will need a headset though as it uses the controller part where the volume and on and off buttons are as it sits on top quite happily working with it. It can not be used as an additional headset unless you have another spare.

Another use is for those single player games that require or can at least use the voice from the Xbox Live communicator to issue commands by voice recognition. No longer do you have to look silly playing a single player game with the headset on! Use the SpeakerCom and it looks much more civilised.

A great little device which again shows how NYKO can create something so useful and rewarding to the market. You won’t use it all the time, but will become essential when you have friends around or just want a break from having the headset on. 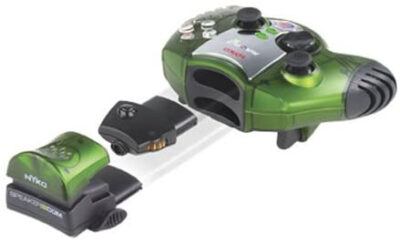