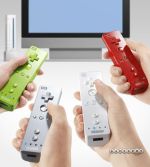 Over at Max Console, they claim they have received detailed specifications of the Nintendo Wii from a developer. These include:

People are already starting to say that it is nothing more than a Gamecube 1.5 re-branded and at this point it is quite easy to see why if indeed these figures are accurate. I must say that alarm bells are ringing with the only 1.5x faster speed increase for the GPU and especially with the so called ‘classic controller’ that will be shipped. I thought the whole idea was to have innovation? Hopefully this just means for the Gamecube games rather than any Wii exclusive titles.

This information is not yet confirmed, so we will as ever have to wait and see. Even with a far cheaper price point though, the Wii is looking quite unspectacular hardware wise, unless they really have the killer software to show off what the controller can do.

This is really putting pressure on developers now to come up with the goods to showcase at launch what the Nintendo Wii is all about. Granted graphics are not the only factor that should be considered, but it is one that shouldn’t be ignored either!

That sounds about right for what I was expecting the Wii to be.

Now if they could just hurry up and release it. :P