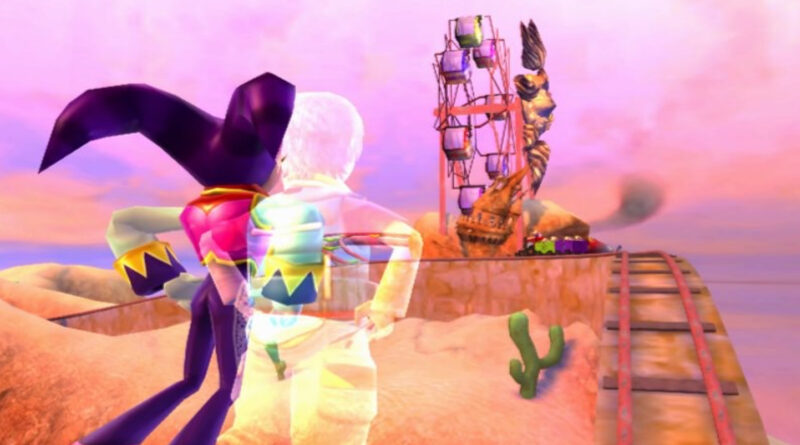 It seems like an eternity since I last enjoyed the original NiGHTS into Dreams title on the SEGA Saturn. Featuring arcade scoring, fantasy environments and music from heaven, NiGHTS into Dreams captured more than just our imagination, it also captured our hearts.

Yes of course it was a tad cheesy in places (especially the ending music!), but it was just a magical experience from start to finish. I purchased a Nintendo Wii mainly due to this title appearing only on this console and SEGA sending a copy for review (crafty), but hey NiGHTS: Journey of Dreams is here so lets give it a whirl.

Just like the original, you can either choose a male or female child as your character. Both take a path with different levels to experience eventually leading to a similar conclusion. The story goes far further in the sequel with a helpful owl guiding you along step by step.

Will and Helen, two twelve year olds, appear to have emotional strife in their young lives and by exploring Nightopia, they can reclaim their Ideya and protect their dreams. Battling both Reala and Wizeman, NiGHTS and his new friends glide around levels collecting keys, blue orbs and flying through gold rings. Really the story ‘should’ be of very little importance as it is all about gameplay, well actually that was the case in the original.

Flying mostly from left to right in a pre-set path, you can enjoy some pretty impressive aerial entertainment, while trying to score highly to improve your rank. NiGHTS can also change into a rocket and a fish among other transformations, which will aid you through different areas such as underwater, but the basic premise is the same throughout.

There are a multitude of control methods you can employ. First is of course the Wii remote, although the aiming where you fly approach is pretty terrible. Maybe the Nunchuk is a better alternative, but for me personally, I recommend the classic controller. Even then though, it just doesn’t feel as robust as I remember and could certainly see just a little tweak here and there in any future titles. I do fear though that the way the analogue sticks are designed on the Nintendo Wii, this may be difficult.

Each step of the way, cut scenes are presented explaining the path ahead. This hold your hand approach is actually not welcome as far as plot is concerned. I would much rather prefer the imagination to be inspired rather than every last detail exposed with a simple waffling of character interactions. The mystery is lost with all these breaks in gameplay and I can’t help but feel a little cheated in this area.

So we finally set down at the beginning of the game in an area where you can select the dream world you wish to enter. Each door contains a fair few sections all based on the same environment. The first is by far the best as you are treated to a fairly accurate interpretation of the original game, but alas it goes a little down hill after that. Before the idea was to collect the blue orbs and with enough under your belt, you could enter the cage and unlock the next area, however now you chase a bird with a key. Why the change? Now I feel like I have to rush after this key rather than gliding, floating and spinning through the skies. A puzzling change to say the least!

Subsequent missions vary between following a flying octopus that generates rings you have to fly through, gaining your way through a maze or traveling on foot. All of these extras feel nothing more than stocking fillers and distract from the whole purpose of this title.

Graphically, NiGHTS: Journey of Dreams just about drags you along the ride with the boss levels in particular standing out with style. The main environments though leave a lot to be desired with a pretty bland affair. Although there are some nice backdrops, it just doesn’t ignite you. For a dream world, these kids aren’t going to be winning any prizes for creativity if this is the best they can come up with. The framerate can also be a little choppy at times, but thankfully it doesn’t have any great impact on the gameplay, just a mild irritation and nothing more.

One major saving grace though has to be the music. I would happily purchase the soundtrack as it remains faithful to the original and keeps that lovely charm flowing. The character vocals do the job nicely, although hearing NiGHTS speak is very unsettling.

There is a basic 2 player mode where you can race each other offline and online, but its pretty unspectacular. You can also go online and share your ‘My Dream’. This is essentially a place to cultivate and show off.

We have waited a long time for a sequel to come along and shine that magical beacon again, however NiGHTS: Journey of Dreams tends to stray into my worst nightmares more often than not. The controls just aren’t quite there, the graphics fairly plain and the story tedious. The arcade styling of the original has been lost in a vein effort to add extra gameplay hours, however the core I remember has now been diluted into a weak substitute.

NiGHTS: Journey of Dreams is by no means a total loss and deserves a flutter, just don’t get too carried away especially if you want a nostalgia trip. At least an opening may have been created to see yet more titles in the series appear far sooner than the previous wait, but I had hoped for a lot more in this current title. Oh well maybe next time… 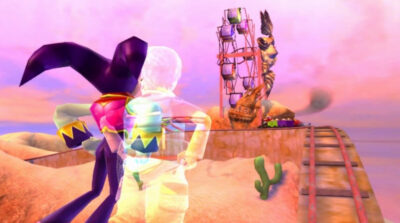 It’s fun making the character Nights fly on each stages.
The character is quite like Sonic othat can fly. The levels are stunning and very colorful.

Looks like a nice role playing game that my daughter would enjoy. Based on your article, playing it using the wii controllers may be a bit of a challenge but I am interested to see how one can maneuver through this game. I think I’ll just stick to food this time or a nice game of Cooking Mama.:)