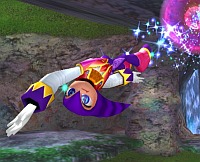 When I look back for the ultimate in nostalgia, my mind wanders back often to the SEGA set of consoles, including the Saturn. Although the Sony PlayStation became its undoing, NiGHTS into Dreams and Christmas NiGHTS had me hooked for hours. Yes it had corny music and if you completed the game you had to endure two children singing out of key, but hey you couldn’t ignore the gorgeous visuals and utter charm throughout.

So imagine my dismay when the sequel, NiGHTS: Journey of Dreams, the game I have waited a decade for appears on the Nintendo Wii exclusively and not on my beloved Xbox 360. A few curse words and stomping around like a teenager prevailed for a while. It just wasn’t cricket… 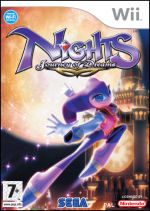 SEGA then cunningly sent me a copy of the game for review! Maybe they knew this would break me. Sitting next to me in its glossy white case, oozing with temptation and pushing my sense of frustration to the limit. I have had to give in now and have ordered a Nintendo Wii. Like everyone else though, I will have to wait for the stocks to come in, but luckily I have a plan.

A friend of mine has kindly allowed me the use of his Nintendo Wii so I can have a glimpse of this long awaited return. My heart pounding with excitement and at the same time scared to my wits that I am going to be disappointed. I insert the game into the console and.

At first glance, NiGHTS: Journey of Dreams harks back to the original in virtually every sense. By this I mean the music, the style and the same flying sensations have been pretty much kept intact. The controls feel a little awkward though and this is even comparing it to the SEGA Saturns D-pad. The perfect feelings of flight that the original had in the bucket load have been ever so slightly lost. This is very bizarre when you consider the Wii is renowned for its varied and ingenious control schemes.

There is certainly much more though to just picking up your Wii remote and aiming. You can still delight in the musical arrangements that persist to indulge us in our imaginations and the same infusion of lavish scenery will at least remind you of simpler times from the SEGA Saturn.

NiGHTS this time around does include an adventure element, but whether this will actually add to the overall gameplay experience remains to be seen. Hearing characters talk for the first time filled me with a real feeling of dread, especially when the main character is both male and female! With all this though, I still can’t help but feel I will adore this game in time. That annoying nostalgia will keep my hand inserting the game disk to reveal yet more memories from earlier gaming days I enjoyed, but more than that, I have wanted a sequel for so long and now I finally have it, I must give in and keep going.

Is this the Yamaha Tyros 6? Yamaha Tease with New Videos…

My Beneath A Steel Sky Enhanced Soundtrack Updated – Version 1.1 Released for ScummVM

I remember way back when… my cousins got the original for a console we didn’t have, and were never going to get. I wanted to play it but they wouldn’t let me.

So walking through my local supermarket 2 days ago, fresh from recieving a Wii from my generous mother for my 22nd birthday, I was taken by surprise to see ‘that character from that game from forever ago…’, and instantly made room in my food budget to get it :)

I’m really enjoying playing it. Maybe someday I’ll be able to play the original too. It won’t be the first time I’ve done something backwards!

:(( i love this game soooo much the music is beautiful!!