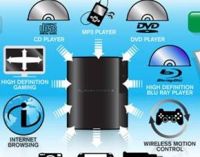 If you maybe disregard the Nintendo Wii for a moment, the next generation of consoles have become far more than just a gaming device. In fact both Microsoft and Sony are taking the horse power available and pushing ever more content in our direction, be it high definition, photo viewers, music players, movie playback and download services.

Both the Xbox 360 and indeed PlayStation 3 are capturing our attentions in a whole new world of online connectivity and media viewing, but Sony in the past has had trouble defining the difference and so has Microsoft. The Blu-ray and HD DVD issue isn’t going to go away easily and although both can offer high definition movie playback on these new media storage solutions (Xbox 360 with the HD DVD add on), both also are competing for dominance in the market. The lines therefore can get a little blurry when trying to promote these consoles as gaming heaven, while also presenting the virtues of something completely different. 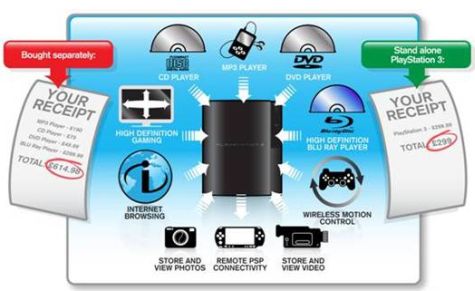 Whether we like it or not, this is how future consoles will stack up as well and the Nintendo Wii is just the exception to the rule (although even this system has its gaming roots shaken a little with extra functionality you wouldn’t normally see in previous consoles).

I for one adore all these options within the console, what I don’t like though is the format war between HD DVD and Blu-ray. This one subject alone is worthy of another post altogether, but gaining extra value out of next gen consoles has to be a good thing as long as the root, that being of course gaming, isn’t lost along the way.

I Was This Close to Purchasing Blu-ray! However…

Uno Taking Over the World on Xbox 360 Arcade

Sony DualShock 3 Controller Impressions – What A Grumble, Without Rumble

However, it would be interesting to know where MS and Sony are going to, what their future plans are, so we, as users, also know what to focus on. For instance, is the Xbox Live Marketplace just an answer to current demand, or does it have a bigger goal in the future of the (MS) entertainment experience…

All these added functionalities are good. But the systems are slowly diverting from being just gaming systems like they used to. Since more tools are being implemented, then issues such as cost get factored in that trickles down to the consumers (just to name one).

Sometimes , it seems like the developers are more keen on SELLING their consoles by adding these functionalities (that no one asked for) as tactics “for dominance in the market” instead of making consoles that gamers want to BUY. But alas, the giants control the trends more than us tiny consumers; the HD format war – now seemingly being decided by our innocent consoles is perhaps the most frustrating issue of all. Gamers are even more divided because of this. I’d welcome “Gaming Systems First, and Last” like it used to be anytime.