For over 5 years now, I have been writing gaming articles for various websites including at one time my own Xbox website until I closed it down in 2005 due to the mass of time that was required to keep it running.

All this work in the past was more of a hobby (therefore for the love of it rather than for the money) and any freelance I have been working on has been more to do with my interest in Yamaha keyboards and digital pianos. However this may change…

360Zine, a new bold attempt to bring Xbox 360 gaming happiness to the masses via online delivery of free magazines in PDF format has just launched today and I am pleased to say an article I wrote for them has appeared: 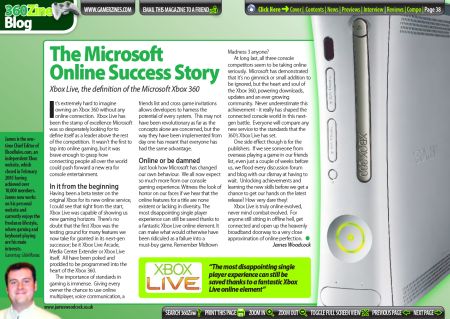 Featured on page 38 titled ‘The Microsoft Online Success Story’, I have a natter about how Xbox Live has evolved and changed our gaming habits forever. I even manage to slip in Midtown Madness 3! Most of my online friends probably came from playing that game and will know how much we all loved it on the original Xbox. I am still hoping that we get to relive those moments with a backwards compatibility patch in the near future.

So make sure you download the new and more importantly free Xbox 360 magazine today. It is about 20mb in size and rich in content and even includes multimedia elements such as video to make it all come alive.

Great Job on the article and congrats on it mate. Keep up the great work

Good article there Glide, and nice mention of Midtown!!!

Wonderful job as always and big congrats to you.