On page 29 of the latest 360Zine magazine, you can now read my ‘Xbox Live and Beyond’ article.

360Zine is an online downloadable magazine that launched with its first issue in November 2006. The magazine is completely free and even includes video segments within some of the articles. 360Zine is available in *.pdf format so make sure you have the Adobe Reader software installed.

In this latest article, I talk about the Xbox Live Vision Camera and how games like Tom Clancy’s Rainbow Six Vegas have included face mapping abilities to use within the online portion of the game and how the Microsoft Video Marketplace is transforming the way in which we look at the overall Xbox Live experience. 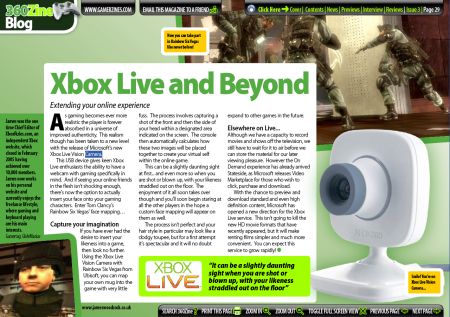 Since writing this article, Microsoft also announced IPTV at this years CES event. Viewing live television on the Xbox 360 console will yet again extend how Xbox Live is used and is now far more than just a gaming platform.

One thing is for sure though, the more and more features that are released on the Xbox 360, the greater the need for a larger hard drive will be. Ending on a bit of speculation, the leaked images of a HDMI port and 120gb hard drive is probably the testing ground for services like IPTV and maybe will be the offering IPTV providers will use at the end of this year or early next year as a complete gaming and television viewing package.

Link: My Xbox Live and Beyond Article – 360Zine

I was listening to a major nelson podcast because he was interviewing the legendary Dave Jones at CES, but I caught a little bit about this IPTV nonsense, apparantly they were commenting on running the service on a Core with no hard drive just fine.

Yeah I listened to the same interview, however with a core system you wouldn’t be able to use the Xbox 360 as a DVR (you couldn’t record).

I can just imagine the advertisements from companies showing off their IPTV subscriptions stating the HDMI port and 120gb for ultimate storage of TV shows etc. All speculation as I said, but makes you wonder :)