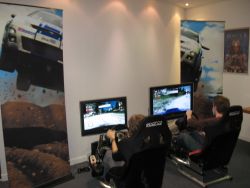 On the 8th August, 2007, I travelled down to London’s SEGA building to view the brand new SEGA Rally where I viewed the PS3 and Xbox 360 versions. Due for release around September, it was great to have a hands on preview and demonstration, so here are my first impressions:

I went into this event with a cynical hat on it has to be said. Is this going to be yet another cash-in or are attempts being made to relive the past and take advantage of the technology available now?

Thankfully, my fears were soon laid to rest as I viewed the PlayStation 3 version first. You couldn’t help but not spot the lush graphics, amazing attention to detail and sun sun sun! You won’t get miserable weather conditions in SEGA Rally. Oh no! Expect a gleaming paradise that is heaped in fantasy and romance, that reminds me oh so much of SEGA classics of the past. That realm where anything goes as long as it can bring a big cheesy grin on your face and a twinkle in your eye appears and this certainly succeeds.

The presentation actually started by staring at a car tyre. No I kid thee not. At this point I thought my long trip to London was going to be a wasted one, but then he pointed out all the little details you could see like the tread, the inside workings, the suspension etc. Then he drove around a bit and something typically SEGA appeared, that magical whoosh.

To read the rest of the article, click the link below:
Link: SEGA Rally Preview – SEGA Gaming Bloggers Event

Aw – it’s a shame I missed you. I went on the Thursday and will be doing my write up this weekend. It would have been good to meet another game related 9ruler :)