On page 33 of the latest 360Zine magazine, you can now read the ‘Community’ section that I wrote, which includes information about what’s new on Xbox Live, my favourite subject of Worms and interesting Xbox 360 laws.

360Zine is an online downloadable magazine that launched with its first issue in November 2006. The magazine is completely free and even includes video segments within some of the articles. 360Zine is available in *.pdf format so make sure you have the Adobe Reader software installed. 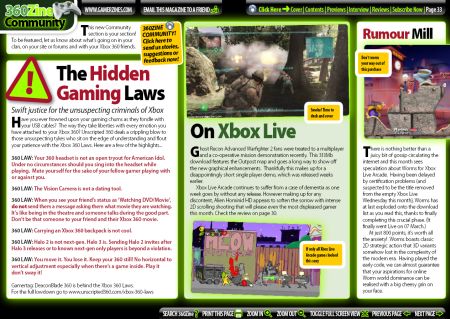 The Community section is a new area of 360Zine, which is designed to get readers more involved and allowing clans to submit their challenges to XtraLife who have joined forces with the magazine. Rather than have me trying to explain it though, why don’t you pop over now and download issue 4?

I am really enjoying writing for this free downloadable online magazine and it seems to be going from strength to strength with every issue that is released. Not only that but they have just announced a PS3 version to add to their Handheld and Xbox 360 magazines as well.

I Interview Major Nelson in 360Zine