Skip to content
You are here: Home > Platforms > Android > Move It! Review for iPhone and Android – Sliding, Sorting, Shuffling and Shifting Blocks 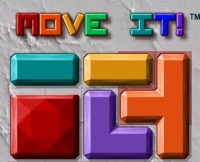 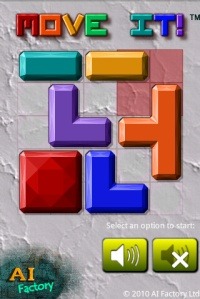 I am sure we have all heard of the ‘trying to get a square peg in a round hole’ cliché. This somehow sums up Move It! by AI factory available for both the Apple iPhone and Android compatible handsets.

The aim is quite simple although the matter of actually completing a level is far more difficult. Move It! features a fairly large red block that needs to be moved to a particular area of the grid to allow it to pass through safely without any of the other blocks preventing its escape route. The other blocks are of various shapes and sizes that require a little thought as you manoeuvre them around the grid. Some will be little tiddlers that offer little resistance, however others will feature a sticking out edge that will drive you to near insanity as your key red block refuses to pass this obscure point.

Whether you own an iPhone or Android device, the smoothness and fluidity of Move It! shines through the bright modern displays. It encourages you to play around with the assortment of mind bending scenarios that can as much delight your inner soul as it can also infuriate your senses.

Successful completion of a Move it! level isn’t an indication that your time here is over. The game tracks your personal best time and number of moves for each puzzle and will reward your efforts with gold, silver or bronze trophies based on how rapidly you whiz through each puzzle. 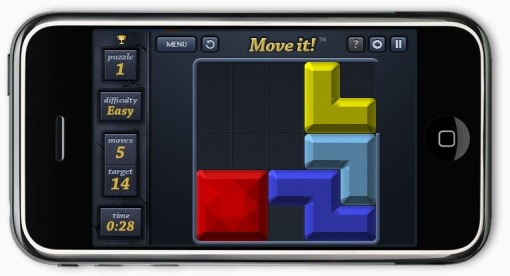 Bizarrely, the iPhone and Android versions actually differ in a number of ways. Although both facilitate a free version with an introductory number of levels around the 50 mark, the designs and screen orientations are not identical. The Android version can be played either in portrait or landscape views, so you can choose whichever way feels more comfortable. The iPhone version is restricted to a landscape view, which in itself is not a problem yet it is a little odd that these games with the same name are not identical experiences. The iPhone however includes a slightly increased visual design to make up for any possible shortcomings. The differences don’t end there… The free iPhone version has an ample selection of add-on packs that can be purchased within the app itself, whereas the Android version features two apps, a free variant and a full edition.

Sliding, sorting, shuffling and shifting blocks actually proves to be a pleasant diversion from many of the other available gaming apps on the various marketplaces. It is a taxing experience that will be sure to frustrate every bone in your body, although somehow this torment is surpassed by a thrill of completion that is hard to beat.

Beginners Guide to Computers #1 – Computer Types and the Operating System