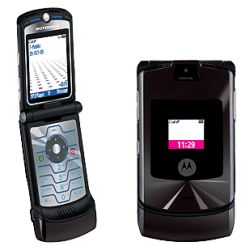 For several years I have kept the same mobile phone number and for a few years the same Motorola V300 mobile phone. Last week I decided it was time to get a new phone (and number) after my poor V300 was starting to seriously look distressed and having difficulty to charge thanks to the horrible power connection they designed. So after having a good look around at some of the mobile phones on offer, I decided (quite easily actually) on the Motorola V3i:

The V3i is the evolution to the popular V3. The thin and sleek design is retained, but the V3i has a 1.3 mega-pixel camera with 4x zoom and video capture and removable memory card to add to its feature list. You can see who’s calling without opening it – the large internal screen is complemented by an impressive external display. The precision cut metal keypad reacts to the lightest of touches and there’s a built-in speaker when you need to go hands-free. It has BluetoothTM plus it’s quad-band – for global calls wherever you are.

The mobile phone looks sexy… Did I just say sexy? Yes I mean it, I love the look…

The silver/grey/black all in one effect really looks stylish, although it is having the effect that I am quite scared I am going to scratch it and even in the slightest I would be heart broken.

Another big plus for me is it is a flip phone. I adore flip phones as they always seem to maximise the space available and tend to have bigger screens yet maintain portability. The digital camera built in is pretty decent for anyone taking an image in a hurry, although it is very easy to blur the photo if you move in the slightest when simultaneously pressing the capture button.

Thankfully the power port is now a nice and simple USB port, which should hopefully mean in a couple of years the connection won’t be easily disrupted nor require my attention to fiddle with the wire until it suddenly starts charging again.

One thing I am really beginning to hate though is the T-mobile introduction when you boot up the phone. I had a similar problem on my previous unit, but is there anyway to change or remove this without some dodgy hack?

I was a big fan of this phone.. just got the new motorola for free through one of dot mobiles and it is such an improvement (as you’d probably expect, being 5 models newer)