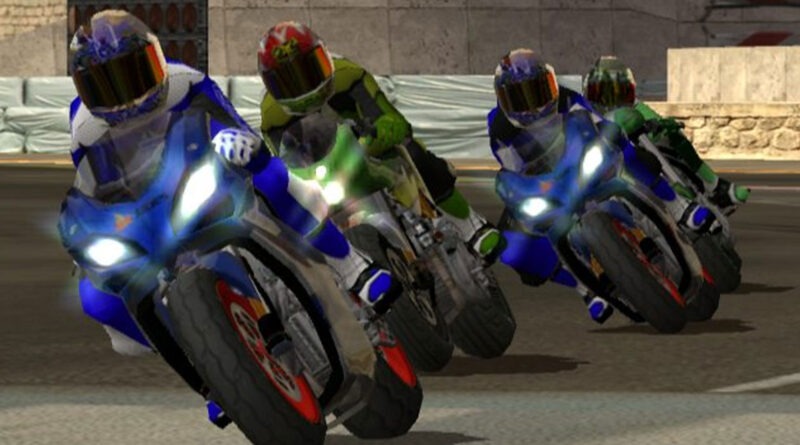 One of the few games that bring me so many happy memories has to be the original Moto GP, the demonstration that came with the Xbox Live Beta testing kits. Back then (without sounding too old as a memory bubble appears) it was our first calling to the online service from Microsoft. To say we all sat back in amazement is not an understatement, as we all experienced how to add your very first person to your Xbox Live friends list. It was so much simpler back then as everyone was so focused on the actual technology and wonder of gaming and chatting, conflict between anyone was extremely rare. These were some of the best gaming experiences I have ever encountered and can sometimes be a far cry from what we can sometimes experience in games like Halo 2, where most people take the game far too seriously.

Although impressive, the original Moto GP did have its problems and as with most online games, flaws and cheats were found quickly, enabling people to skip ahead on the track by crashing into the pits, taking corners by using the grass missing entire sections and all manner of other shortcuts were found. The sequel however fixed these mishaps and enhanced the graphics no-end. Moto GP 3 takes this to a more refined point rather than being an explosion of a leap?

The typical Moto GP mode has the same stunning amount of tracks from the second game and will add many hours of entertainment. With all the 16 official tracks and 24 riders from the 2004 season, fans of the sport will be able to relive the spectacle of motorbike racing at its best. Even people who don’t enjoy being a spectator of the sport, will enjoy the frantic style racing that only motorbike racing can achieve. When racing with sports cars, although the fun is always measured in a high degree especially when you take into account games like Project Gotham Racing 2, however there is something just more intense with this motorbike style racing. The thrill of overtaking someone on the inside of a corner, the chance of flipping off your bike, the sheer precision required to take a corner perfectly makes concentration not just a skill, but an art form that would test even the most ambitious gamer. This catapults Moto GP 3 into a league of its own and anyone who loves racing games should at least have a go.

The game is terribly hard to master, however everyone has the same problems and with practise you will soon see the benefits of setting up your own custom bike, tweaked in many various ways. If this game was any easier, you simply wouldn’t experience the same thrill when you reach 1st place!

By racing through the various skill levels, you also increase your seed, which is basically a scoring system based on who you beat in a race. This is very interesting in the online arena and gives you not just the leader board score based on lap times, but another useful statistic based on competitiveness.

If serious racing isn’t quite your thing though, ‘Extreme’ mode may be the one for you. More like an arcade version of track design, you can speed your way at fantastic acceleration around bends and straights far faster then the more serious Moto GP series of tracks. This has opened up a new audience to the game series by adding something a little simpler, and maybe to some more fun, while keeping the thrill that lives on in the Moto GP mode. There are 16 additional ‘Extreme’ tracks available, making a massive 32 tracks in total. That should keep everyone busy for some time to come!

Online is where this title takes on a new life of its own. Racing online against real opposition is always fun and exciting as computer AI is never perfect, but Moto GP 3 with its superb racing speed and quality allows for exciting spectacles like nothing I have ever seen before in the online racing arena.

A new feature allows the host of a room to assign a ‘commentator’ mode. This allows one person to sit out and watch the race using the controller to change the player they are following and the angle. This means anyone can commentate on the race with all the riders listening in. This is a great novel addition; however the lack of on screen information for the chosen commentator is a little bit disappointing. It isn’t always clear which person is positioned where, or who has crashed, but these little gripes aside, it’s a great idea and I am sure plenty of people will give this a go. Just be careful not to put anyone off, the times I have been commentating to only say, “Reservoir Dog is in first place.. Oh hold on he has crashed in spectacular tradition into the corner.”.

As usual you can enjoy a room of up to 16 players which for a racing game is a large amount, especially on that first corner where you can almost expect a collision by at least two bikes, but this just adds to the shock that you have somehow scraped through.

Practise practise practise is most definitely required to gain a good ranking online and offline. Initially if you have never touched the previous games in the series, you will be extremely frustrated by the very exact control method that is required to successfully negotiate a track, however over time and with a lot of patience, the struggle pays off with a fantastic gaming experience.

However if the Moto GP season mode is getting tiresome, you can always go to the ‘Extreme’ modes to get some arcade style action to pass the time.

The controls are just the same as the previous Moto GP games, using ‘A’ to accelerate left and right triggers to break etc.

To start off with lets just say Moto GP 3 has some of the best graphics around for adding effects and weather to any situation. However when experiencing the new ‘Extreme’ modes you will notice the graphics drop a little in quality. The buildings look fairly plain, the trees look horrible and the track detail is minimal, however it’s not the graphics in this section of the game that count, so much more the gameplay which makes up for any losses.

The graphics in Moto GP mode, the more serious of the two modes, is refined rather then the same jump we saw from Moto GP 1 to 2, however this refinement still makes for a truly stunning racing experience. It is a shame the ‘Extreme’ tracks didn’t seem to have the same amount of attention, however both modes offer great spectacles with very different styles of play.

If you haven’t played the previous games in this series for Xbox, you can enjoy (on the Moto GP mode tracks anyway), very high resolution textures, spectacular rain and weather effects, not to mention the superb crash animations which I guarantee will amuse you even if you have been knocked off by a competitor, at least for a few weeks.

As you would expect with a racing game, the 5.1 audio is superb especially in this title. The sound of the engines is immense at the starting line and each bike sounds different allowing individual bikes to have its own personality.

One sore point though is the in-game music. It is truly dreadful and I would recommend anyone mutes so you can hear the far more satisfactory engine sounds.

There is no doubt in my mind that to get the most out of this game, Xbox Live is key. Although the computer AI is very challenging on the harder skill settings, in fact some insanely so, people with Xbox Live will spend most of their time online battling with the other riders. Get that perfect lap time or just for the thrill of the individual race.

If there is just one more game you want to purchase before you get yourself an Xbox 360, make it Moto GP 3: Ultimate Racing Technology. Insane speed, fantastic competition and pounding sounds will make your heart beat just that little faster. Racing has never been this much fun! 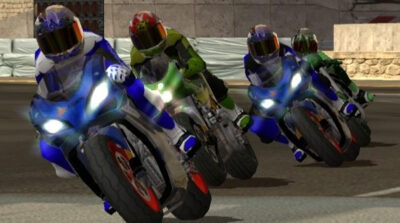