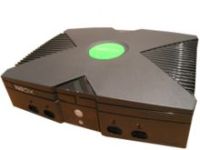 It is hard to believe that the Microsoft Xbox is already 5 years old today and indeed Xbox Live is now 4 years old. Although it is not quite the 5th anniversary for those of us like me who live in the United Kingdom, it still marks the release of the original Xbox in the United States. I started remembering why I went with the Xbox system in the first place and came to the conclusion that it was due to the disenchantment I had with PC gaming.

Before I owned the original Microsoft Xbox console, I was an avid PC gamer enjoying the first hardware delights of 3D accelerator graphics cards such as the 3DFX (1), nVidia Geforce (1), sound cards using for the first time EAX from Creative and ever increasing speeds in processing power. Every year, hardware seemed to make an impressive leap that kept me hooked for years and this was mainly due to the 3DFX Voodoo graphics cards.

I have been with PC gaming since the Intel 486 processor days, but by the time I had a Pentium 3 I was starting to get irritable with PC gaming. Although I still loved games like Unreal Tournament of which I was a member in quite a few clans over the years, I was getting very annoyed at the constant necessity of checking drivers, patches, configuring options, no Dolby Digital surround support (I had a hardware decoder, but games never really used it when you had a Creative sound card), program interference and the list goes on…

I have always enjoyed consoles, but it was the Microsoft Xbox that finally took me away from the PC gaming platform. There were quite a few games that were both on the PC and the Xbox, where its console offering ran much smoother and there is something nice about playing a game through a large screen television. Oh and then there was that little title called Halo!

Then a year later Xbox Live launched with a friends list, cross game invitations, voice communication and that really sealed my devotion to the Xbox. Although PC gaming had online, at this time voice communication was rarely used in preference to horrid text dialogue (in my experience anyway).

For me the original Xbox reminded me of how gaming could be simple to enjoy again without the need to worry about drivers and patches. I still use the PC to play classic point and click adventures, but the last major title I purchased was Half Life 2 on release, but even then I will be getting the Xbox 360 version next year.