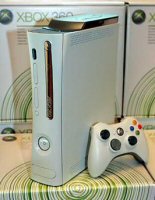 So where to start…. well for Microsoft who have already released their console, it was curious to see what they would have that could wow us. Well this is likely to cause the most impact in the media…..

Then of course Halo 3, of which you can download an announcement video on Xbox Live Marketplace right now. Also a wireless headset and the webcam have been announced. I was a little disappointed with the fact that the HD DVD section was incredibly short and didn’t crucially tell us a price, however we do know it is coming out end of this year.

Gears of War is probably the most stunning footage from the presentation, with some actual in game action. I really look forward to grabbing this game. Also Forza 2, Fable 2 but no mention of a Kameo 2 alas.

Well overall the Nintendo press conference had much more to tell and get excited about, however the Windows Vista guide to send invites and messages looks great and a good reason to purchase Windows Vista early next year.