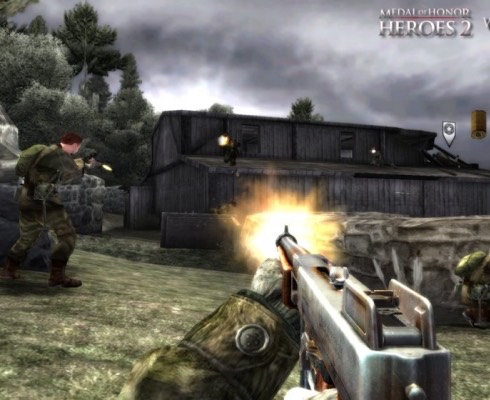 It appears developers have had a rocky start learning what works best with the Nintendo Wii control configuration as the possibilities are endless and failures easy to achieve.

Medal of Honor Heroes 2 needs some drastic consideration, proving once and for all that the Nintendo Wii when properly thought out, could indeed be used for this genre without having to cringe with the unwieldy pain of confusion.

So of course the first challenge is coming up with a control scheme that actually works for first person shooters. The loss of having two analogue sticks presents the first problem, which is circumvented by using the Nunchuck controller to move the character around (forward, back, strafing left and right) and the Wii remote to turn left and right, look up and down. It does feel a little clumsy when you are used to the refinement of a keyboard and mouse on a computer or two analogue sticks on console controllers, but with a little practice it no longer feels like you have been challenged to pat your head and rub your stomach.

Unfortunately though, the Wii remote buttons aren’t exactly within reach when you are twisting, waving and shaking it around. Reload is achieved by pressing up on the D-pad and taking cover by pressing down. When you are also hovering your thumb over ‘A’ to steady your shot (important for accuracy), you will start feeling a little frustrated when everything seems a little slow. 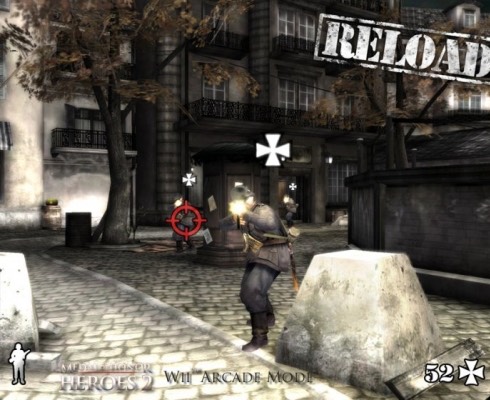 The real novel attempts by the developers to utilise the controllers on the Wii may be considered unusual and completely new, but that is simply because it is. Give it time though as throwing grenades realistically, mounting rocket launches on your shoulder and leaning around corners rewards you with a sense of satisfaction and immersion you just don’t expect or attain from our other console counterparts.

As a fairly brisk World War II shooter, it has all the usual plot elements. Nazis (lots of them) and various challenges throughout. Blow this up, shoot at this and snipe these men are all part of this world and with the new controller setup you actually experience something quite bizarre, however entertaining with perseverance.

The usual assortment of weaponry including pistols, rifles, shotguns, sniper rifles and grenades also feature heavily. Grenades are one of the delicacies that you will enjoy in Medal of Honor Heroes 2. Selecting this item and then using the Wii Remote to throw it towards a grouping of Nazis certainly motivates a smile when they are flung across the screen. 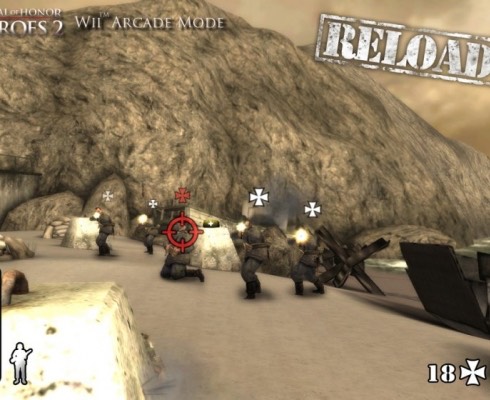 You are not going to be running around like a mad man on this game either, oh no! Ducking behind neatly provided objects and then leaning around or shooting over this cover will ensure success. You need to be a little skillful and certainly not rampant in your attempts to whiz through to the end.

Graphically the game is bland and quite boring it has to be said, especially when you compare it to a classic like ‘Return to Castle Wolfenstein’ on the original Xbox, never mind the next generation hardware. The control scheme just about makes up for the sometimes mediocre presentation and the small layout of the levels. On the plus side though loading times are short. 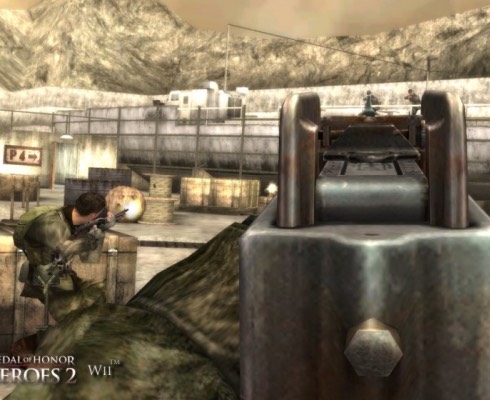 Once the campaign is over with, there is also a quite nifty Arcade mode, which actually plays similar to House of the Dead or Ghost Squad. On a pre-set path where you are unable to move your character, instead you simply aim at the enemies on screen and fire. Certainly one for the Wii Zapper accessory if you are lucky enough to own one.

Online is probably the biggest surprise with up to a massive 32 players supported and a few game modes including Deathmatch, Team Deathmatch and infiltration. You are hard pressed to find any games maximising that many players all at once but here we are, on the most unlikely of console candidates, bragging about the mass online carnage provided.

The audio is not exactly ear piercing, however you can’t help but enjoy games that use the speaker on the Wii remote when reloading. A sense of running around in a dangerous war environment is lacking for the most part, but vocal work during cut scenes will at least temper your auditory aggravations. 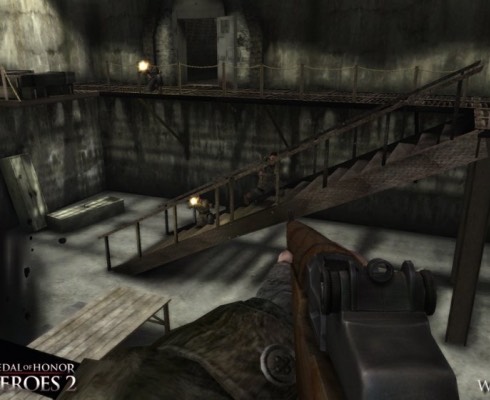 Although I am often cynical about any attempts to alter control methods that already work, the Nintendo Wii has displayed character and a little charm by utilising many of the features of motion sensing as well as astounding me with a pretty impressive online mode.

Medal of Honor Heroes 2 is far from perfection and is riddled with inadequacies mainly due in part to the drab environments, but as far as first person shooters go, this is actually an eye opening experience. If you want to try an alternative to the usual first person shooter affair you often see (and there are many of them), how about this title on the Nintendo Wii. You won’t regret the experience too much and you may even learn to love the control scheme as well.